This documents you went through the Getting Started guide and have the necessary software installed. If not please check out that guide first and then come back.

Welcome to the Wonderful World of Modding

This guide is going to teach you some quick tips on navigating the Creation Kit.

Note: If it’s still intimidating after going through this, watch some of the tutorials by darkfox127. His tutorials are actually for Skyrim, but the Creation Kit used for Skyrim is nearly identical to that for Fallout so a lot of the same lessons apply. If you’d prefer to only watch tutorials about Fallout, I’d recommend videos by Seddon4494.

Both of those youtubers are very thorough and keep things simple. Even if you don’t follow along, but just watch and listen, it will all start to click!

At some point I will release a series of videos where I essentially go through my own tutorial series so you guys can watch it happen. In the meantime, a Discord channel has been set up for people to hang out and work on Sim Settlements projects!

Keep this document handy as I’ve tried to design in a way that you can use it as Quick Reference while you’re going through the other tutorials. May even be worth printing out some of it.

By the time you finish this guide and complete the tutorial series, you will officially be a modder! A lot of the things you learn building for Sim Settlements will carry over and allow you to create new mods for not only Fallout 4, but Skyrim as well.

Let’s get the Creation Kit (CK from now on) open and I’ll introduce you to all it’s pieces. Please be patient with this software, it can be a little slow at times.

Most of the things I explain in the tutorials will go into very minute detail, so the above camera and object movement should be enough to get you through! The last pages include some links to some useful resources, a Hot Key Reference sheet with all of the things we went over (plus a few bonus ones!), and then a primer on some of the object types in the CK that you can reference while doing the tutorials.

Head on over to the Getting Started guide!

Creating/Breaking Down SCOLs (We didn’t cover these, but you’ll make heavy use of them during the tutorials)

Understanding the Object Types in the Creation Kit

Thanks to damanding for this write-up!

This section will be best referenced throughout the tutorials. You’re welcome to read through this now, but don’t worry if it doesn’t make sense immediately. As you start working the Creation Kit the explanations here will become more useful.

In order to complete the Chapter 02 - Creating Your First Building tutorial it helps to have a basic understanding of what the object types are in the Creation Kit (CK) and how they are related for the purposes of building plots for Sim Settlements.

Collision: Collision is a concept that is far more complex than what I'm about to describe, but this oversimplified definition will be good enough for our purposes. Collision as it's normally used in this document refers to the 3d boundaries of the object. If I say collision data, I'm talking about how the game's physics engine interprets interactions between that object and others. Interactions like, can you kick it? Does gravity affect it or is it stuck in place and immovable?

Forms: - ​Every object in the Creation Kit is considered a form. Whether it be an object you might see in the game, such as a gun, or a character, or simple descriptive objects such as Keywords, which have no graphics, but serve an important role in the game.

Moveable Statics: If an object can have physics applied to it, it's called a moveable static. Smaller items can be kicked around by your player character or an NPC such as those blue plastic bins, larger items such as cars can be affected by gravity and fall off of an overpass. Any object which gets thrown across a room during an explosion is a moveable static.

In addition moveable statics are items which the player can interact with in terms of physics impact, but cannot be picked up and added to the player's inventory. You cannot use moveable statics without converting them to statics first in your SCOLs (you’ll learn about these ahead and the creation of them will be explained in the tutorials).

If you use the F4 button and look at an object's preview these will have a blue collision frame in preview. Moveable statics have a gray icon with lines and an orange arrow coming off of it. 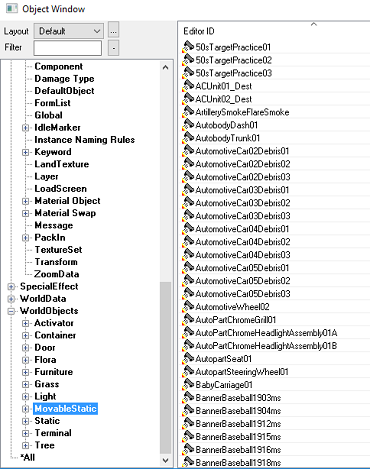 Static objects: These are any immovable object from a beer crate to a wall. They make up a large portion of the items you see in game. Most of the objects built in workshop mode are statics (the things you can’t interact with).

It is possible to create a new static and point it to a model which is normally used for a moveable static. This will allow you to include it into SCOLs and will also allow you to make it constructible in game. However, if you do not include it in an SCOL or modify the actual collision data via some method (outside the scope of this tutorial, but when you feel you are ready - ask and we’d be glad to teach you!), then the object will retain its moveable characteristics (see "pseudo statics" at the end).

If you use the F4 button and look at an object's preview these will have a red collision frame. Static objects will have a purple/blue house icon in the CK. 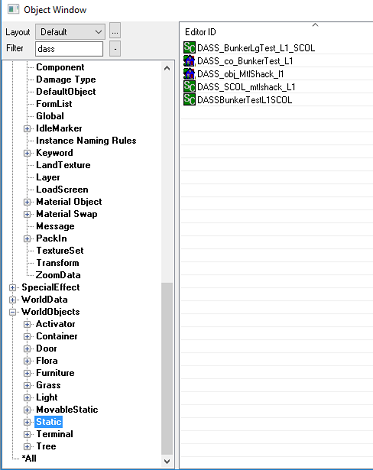 SCOL (Static Collection): These are a series of static objects that are grouped together into one piece (that can also still be broken down into individual pieces). SCOLs play a very important role in making Sim Settlements work. SCOLs can convert moveable static collision data into static collision data if the correct process is used (see "pseudo statics" at the end).

SCOLs also can be used to bake large non-interactive furniture into your building's collision information to make NPC path finding easier. The reason for using SCOLs versus assembling parts individually is that when you combine multiple objects into a SCOL it also creates a combined collision that is also true static collision. That collision information (both the static data and the combined boundaries of the objects) is critical for NPC movements in the game and telling them how they can interact with your objects.

If you use F4 while viewing your SCOL either in a test cell or in preview it will show a red collision frame. SCOL objects will have a green icon with the letters SC (see above image).

A much older (Fallout 3 era) but more extensive wiki page on SCOLs, some of which is out-dated: [4]

Misc. Items: Misc items are similar to moveable statics in that they have similar physics properties and collision data. The difference is that players and NPCs can pick up misc objects and add them to their inventory. Typical junk items like coffee cups, telephones, and empty bottles are all considered misc objects. As I will explain later, Misc objects get a somewhat more unusual usage in Sim Settlements as building plan templates. Misc objects will have a blue collision frame in preview windows. Their icon looks kind of like a bag with gems falling out. 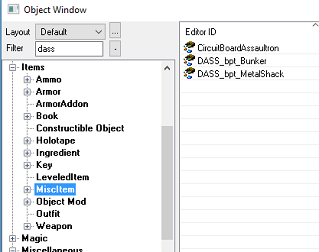 Formlists: Formlists are used to create lists of other Forms (remember from above, Forms are any item in the Creation Kit). The workshop menus are actually a collection of interlinked formlists and keywords, same with the crafting menus in crafting benches. Formlists don't have an object to preview, they are literally just lists. They have an icon with a red question mark and a lined page. 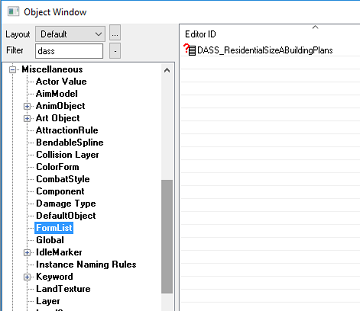 Quests: Quests are one of the most complex object types in the entire CK. They basically combine the story, dialogue, scripts and much more information into one package. Quest objects are not just limited to the form of story type quest you're familiar with as a player. Often quest objects are running in the background for the purposes of having scripts perform a task. These quests will never have an entry in your pip-boy. Sim Settlements uses quests in this way. Quest objects have a yellow box with a question mark for an icon. 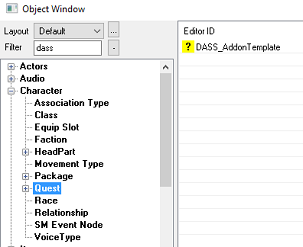 How These Objects Are Used In Sim Settlements

Now that you have an overview of each of these object types, how are they used in Sim Settlements and how to they interact? You'll get experience making each one of these object types in the first significant tutorial of the series. First static objects are the "Lego blocks" that Kinggath refers to when it comes to creating your buildings, parts of your decor and more. You can use some Misc and Moveable static items as decor but they must first be converted to what I call "pseudo statics", they will have the static object icon but they still have misc or moveable static collision data until they're baked into a SCOL.

Creating a static object and assigning a normally moveable static to it requires changing the collision data as well. Simply changing the object type is not enough. If you make a pseudo static object from a moveable static and include it as part of a SCOL, the process of making it turn into a SCOL actually changes the collision data and makes it no longer moveable, it becomes a true static.

If you do not add it into a SCOL then the only other options for changing the collision data is to use 3ds Max with the official Bethesda plugin or using Nifskope to "borrow" the collision data from another static object that is similar in size and shape.