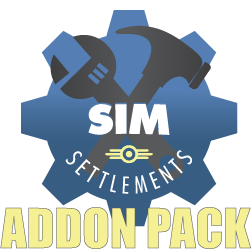 Will always require the newest version of Sim Settlements


Adds 21 new interior plots with a (mostly) Vault-tec approved theme! The Vault dwellers idle chatter in Vault 88 can be rather quirky, so I tried to bring some of that into the designs of these interior plots. Theres a mix of straightforward plots, quirky plots and experiment plots. Use whichever you want!

Heres a rundown of whats inside:

The following is a list of all the plots and a few relevant notes about some of them that wouldn't fit in their message windows:

All Plots: Each plot's message does state where to place a Vault room entrance, however, I have found that the interior plots need at least 4 (2x2) Vault room pieces inorder to be placed down. Doing this leaves a bit of space around the front and which ever side isn't tucked into a corner. I prefer to make rooms around these plots that use 6 room pieces (2x3) to give a little bit more space and to allow easier access to a door on the side. See images if these numbers don't work for you on their own. : D

Homes:
7 Days, 7 Suits
Fire and Ice: There is an image showing how to put these together for optimal effect. However, they work well on their own, so feel free to stick them wherever you want. Although the door on the Ice plot clips through the ceiling of regular Vault room pieces. The bed also doesn't have collision, since it caused blockages above and behind it. NPCs can still sleep in it though.
Shelver's Lair: This room has only one entrance! It can be placed in an open common room or sheltered in its own space of 6 room pieces.
Bunks L and R: These plots mirror each other and can be placed side by side so their
beds touch. Each has it's own set of clutter to follow the opposite
nature of mirrors.
CT Gaming
Clem's Room

Farms:
Okay Diner: Each level has a different varity of prepared foods that it will generate. Each table in the diner also offers a random food you can take off the tray. These foods work just like regular crops.
Mirelurk Plot: This plot produces eggs and meat. However, only the eggs are directly harvestable. Also the NPC this plot spawns wanders. But its harmless.
Nutritional Supplements: This plot introduces a longer lasting variant of Food paste. It is produced by the plot and is directly harvested from the counter. Not the table!

Martial:
Potentialities Lab: Spawns a new guard NPC at levels 2 and 3 which add additional bonus to the plot. The NPCs can be checked in the settlement menu to see which bonuses those are. These bonuses are added to the plots readout as well.
Loyalty Corps


No there isn't an Overseer's plot. The dest takes up way too much space on an interior plot. It would have to go onto the full sized plots, but the utility pole and the vault pieces don't work well together.

I use the Def UI mod to swap out inventory tags with icons. All my building plans are tagged with (Vault-tec) to swap to the vault icon included in Def-UI. I'm working on creating an option to turn support for this mod on and off. Right now it's on, so if you don't use Def UI, the names of the plots will be really long. Sorry!