ok i relise this is the second problem ive had today but im new to the mod and just trying to get it working the first time im even knew to sim settlements... i have 2 conqueror expansions active and are effecting the game world yet conqueror doesnt seem to relise they are there... can someone tell me what to do...

ive been looking around this site and read something about waiting people being told to wait for scripts or something could that be my problem??? if so how long do i wait??? if not what could be the problem??? (im clueless)
Sort by date Sort by votes

I suggest you post your current load order to start.

Folks need something more specific in order to help.

Below can help get that load order.

@ReyBo my computer seems to have fallout 4 set up difrently... for some bizzaro reason my steam folder is (the only local storage for my fallout 4 anything) isnt even in local.... all i can find is the game in one big lump under program files, steam, steam apps, common, fallout 4... though i can find my mods at least... under data!!!!
just to clarify vortex redirects me here for location...
could i somehow copy the plugin list under vortex???

edit i think i found it but only vortex can read it for some funky reason
edit #2 trying to figure out a way to send it from vortex because that is something stand by
Last edited: Dec 29, 2019
Upvote 0 Downvote
N 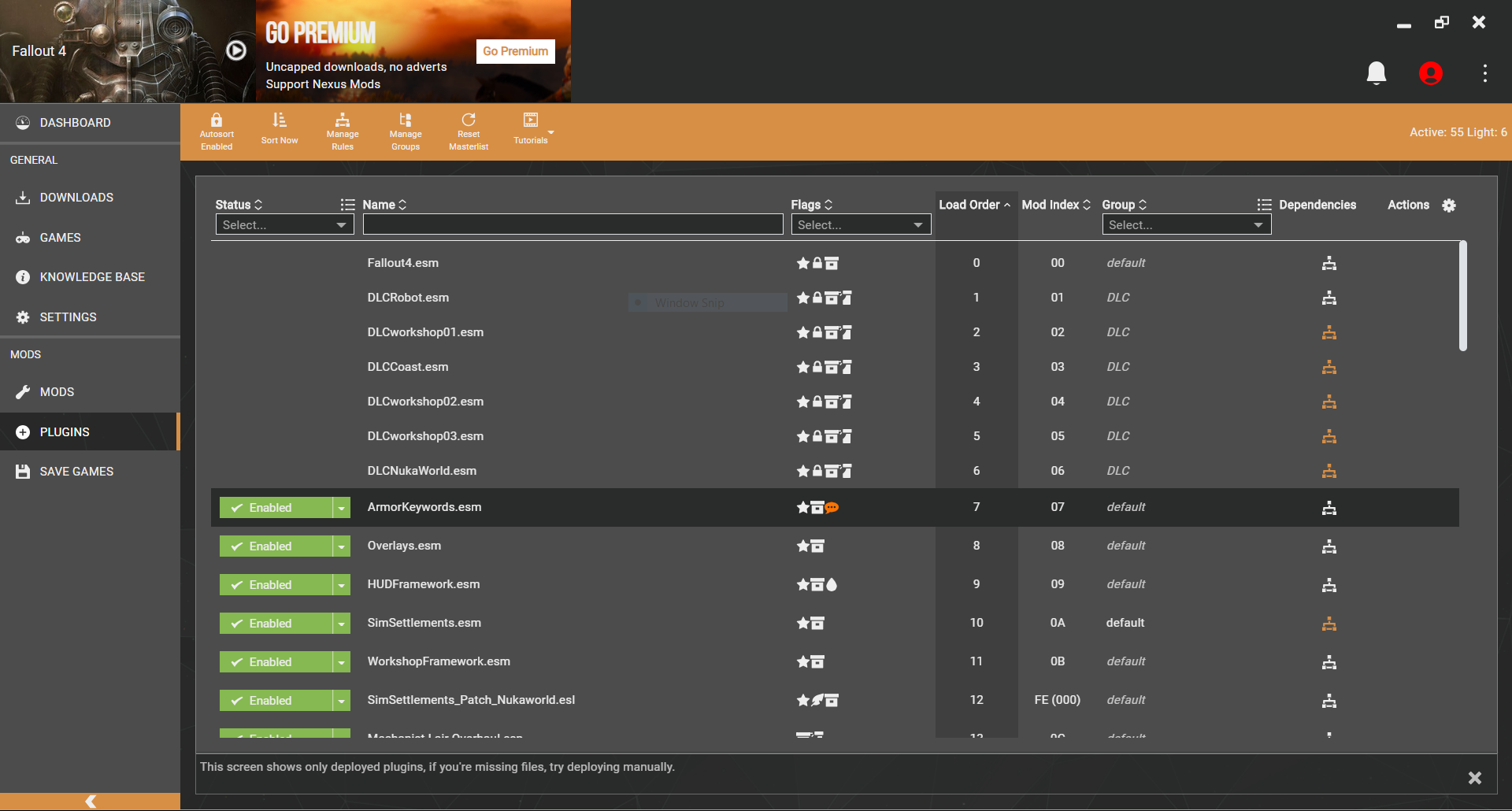 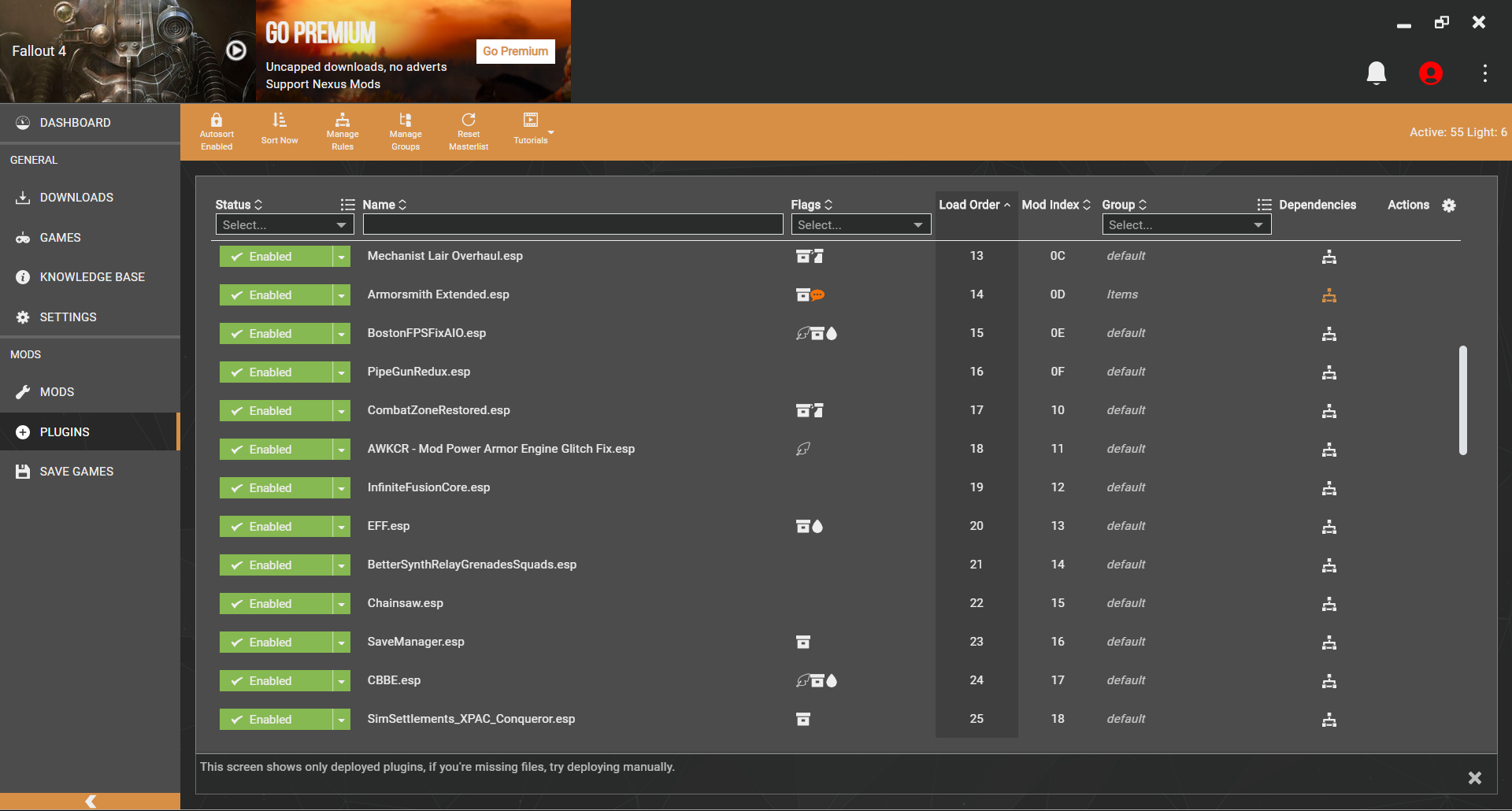 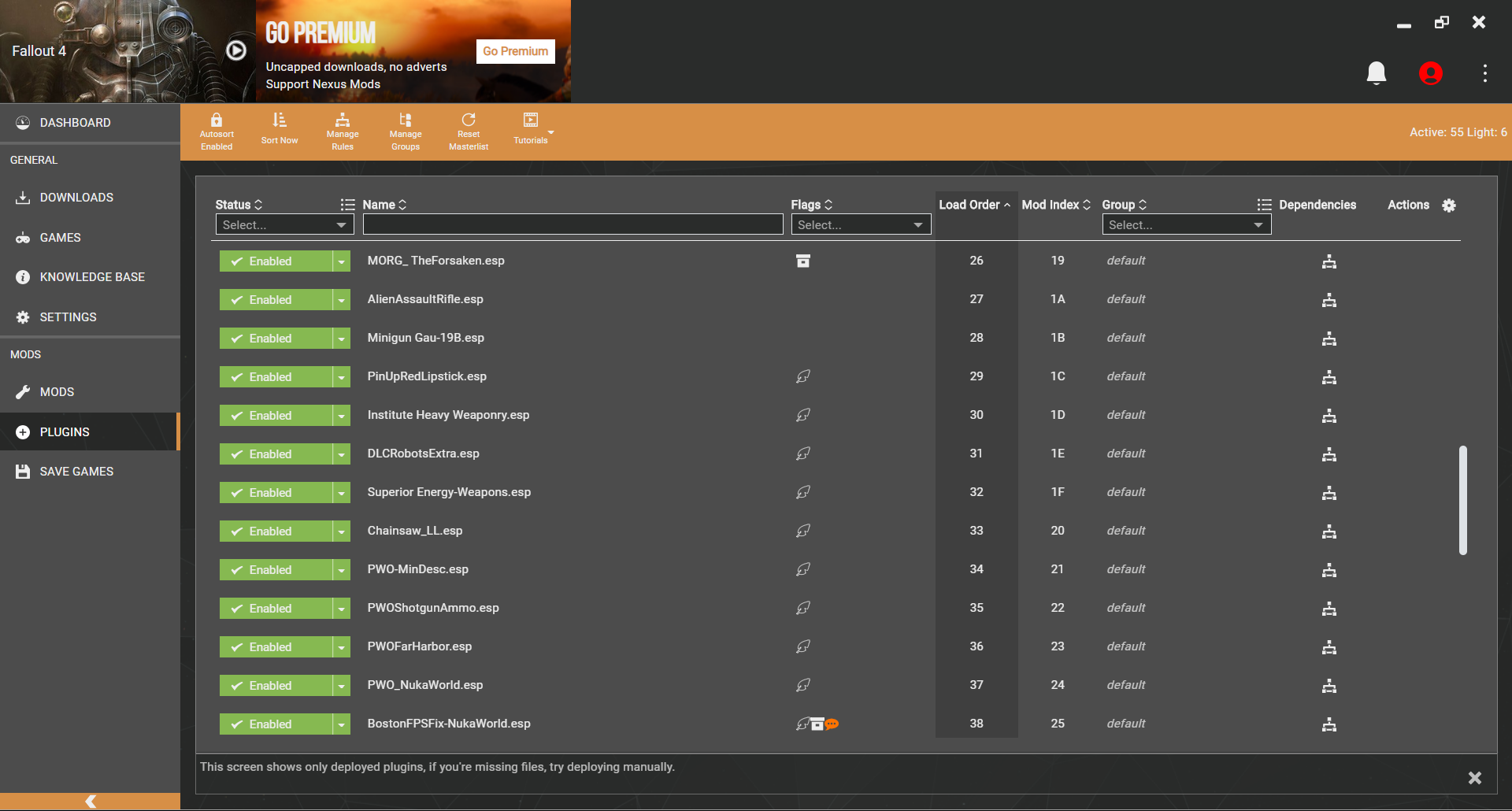 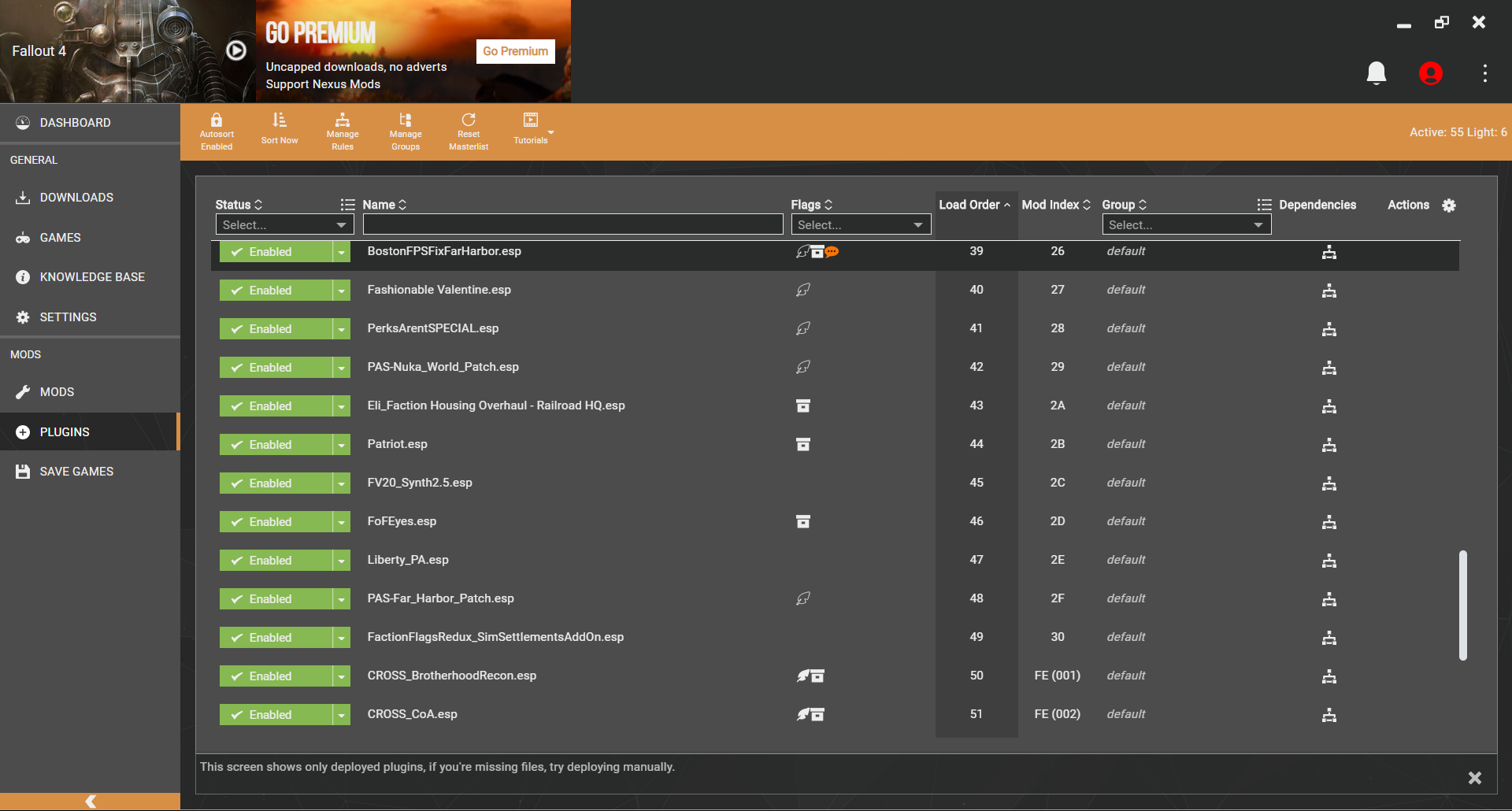 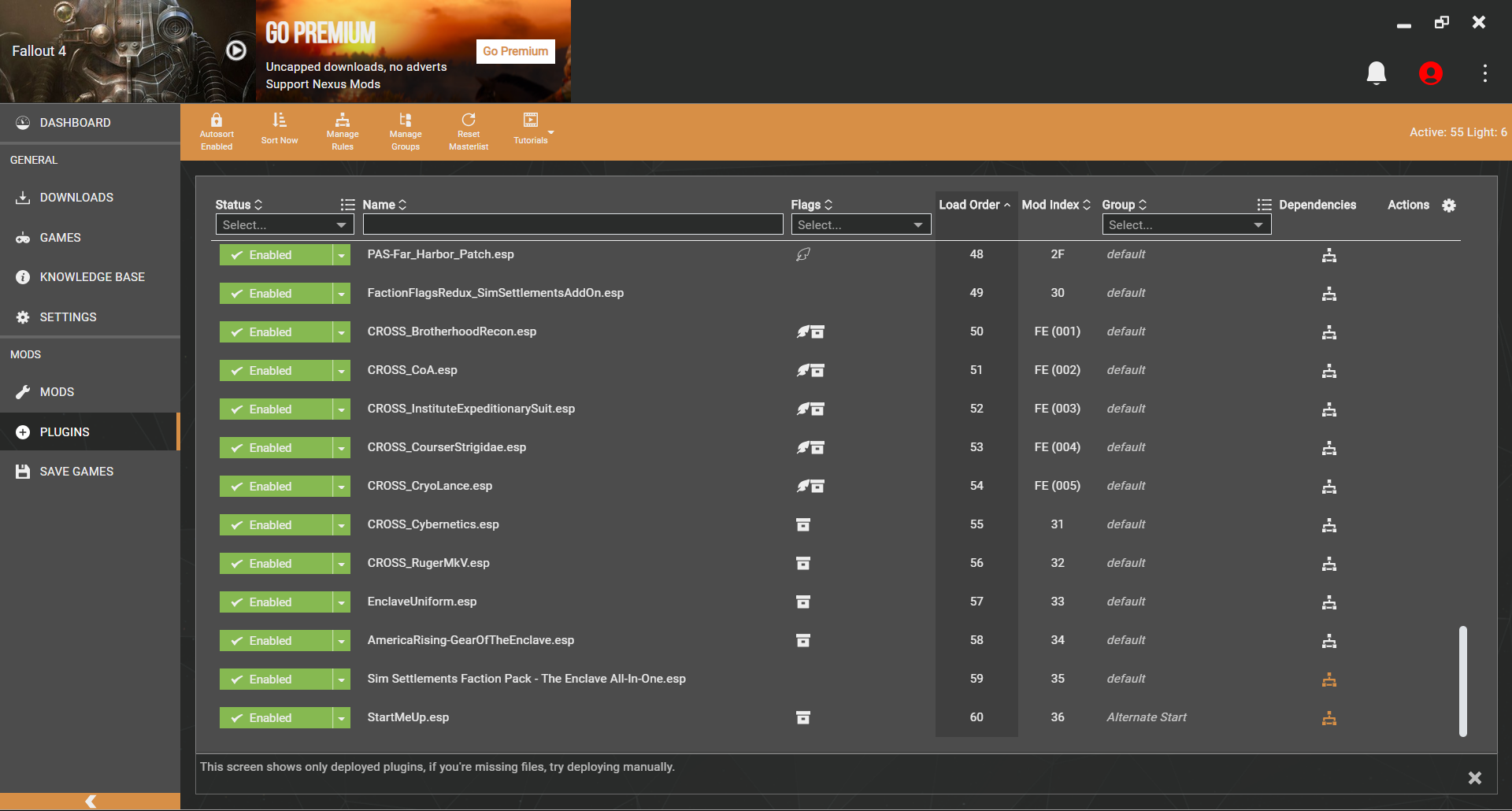 @ReyBo i was thinking about the folder u directed me to and it started to seem familiar... i then remembered entering for another game ALONG TIME AGO... for most people (including me) u have to go down to the search and enter %appdata% or the folder wont show up.... that said i found the thing u pointed me to here it is


i relise this isnt realy needed anymore because of the screen shots i sent of vortex but......
Upvote 0 Downvote

Ok, I don't use:
*StartMeUp.esp but that is one I would not use If I was having a problem like this.

Then:
*EFF.esp
Should go lower. I would put it here:
This isn't your problem right now.
*Sim Settlements Faction Pack - The Enclave All-In-One.esp
*EFF.esp
*StartMeUp.esp

I am not familiar enough with many of your other mods to comment?

Thing is, I would restart the game with most of the mods you have disabled until you figure it out. I would not use *StartMeUp.esp but that is my own goofiness

The below may help as you continue troubleshooting? 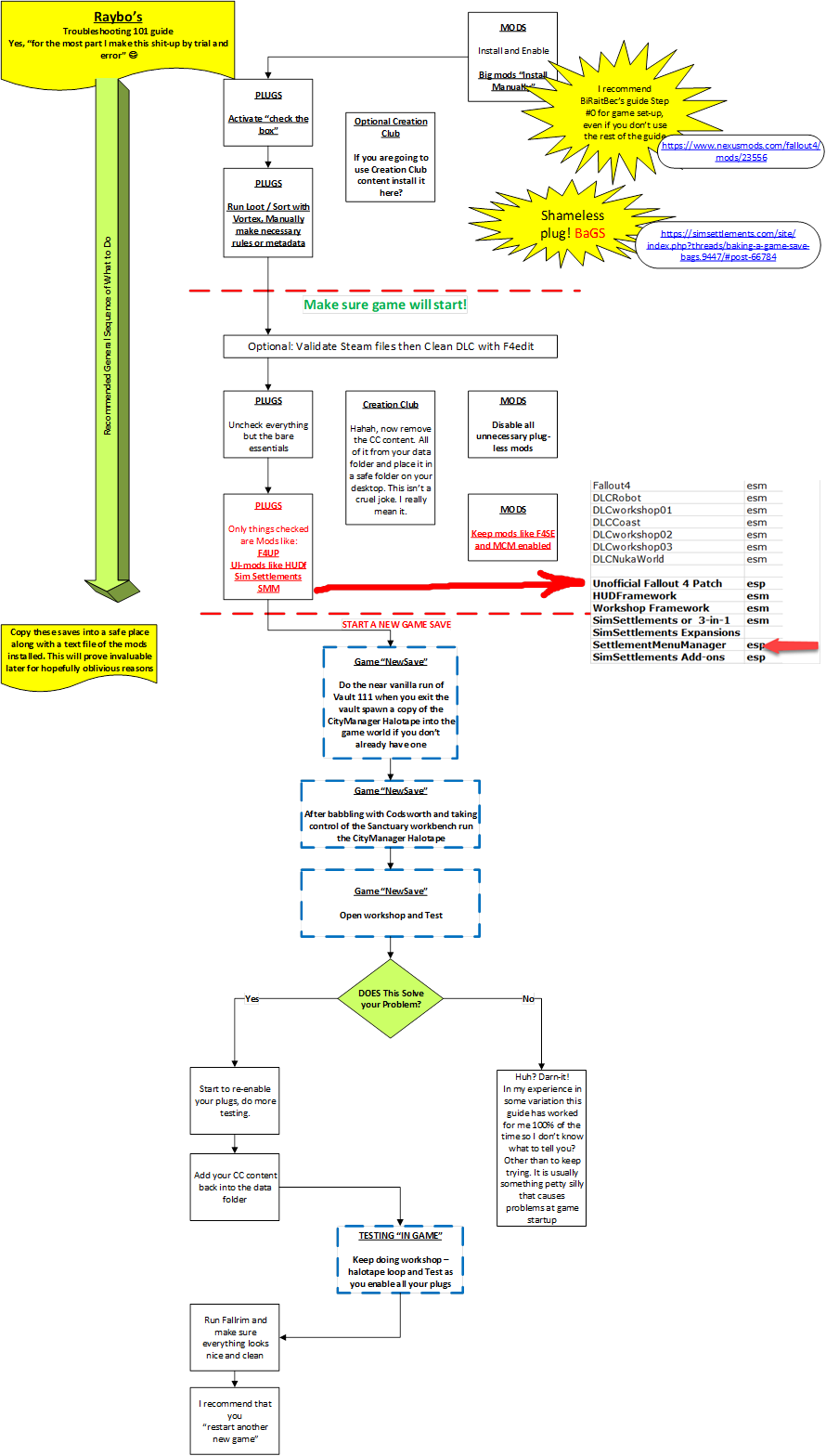 This is what I use to run my games

I also think this guide would be helpful for you:
https://www.simsettlements.com/site/index.php?threads/load-order-and-plugins-an-exploration.11318/
Last edited: Dec 30, 2019
Upvote 0 Downvote
N

@RayBo so wait...... u are essentially saying start the game with most mods turned off and then turn them on at set times??? never heard that before!!!!! i thought that it was best to just start with all mods enabled lol...
Upvote 0 Downvote

Nigel Power said:
@RayBo so wait...... u are essentially saying start the game with most mods turned off and then turn them on at set times??? never heard that before!!!!! i thought that it was best to just start with all mods enabled lol...
Click to expand...

Yes, that is exactly what I am saying.
Upvote 0 Downvote

You can use start me up, but stay in the room until all the scripts finish for conqueror setup (bar on top left).

After the conqueror scripts, save, then enable overhaul mods. Save, enable quest mods, etc.... All your weapon and armor mods can be enabled last.

@reybo how long should it take for the scripts to run and.... before or after conqueror
Upvote 0 Downvote

Nigel Power said:
@reybo how long should it take for the scripts to run and.... before or after conqueror
Click to expand...

If you go here, there is a STARTMEUP version I have tested in pre-war... it works...

@RayBo lol so was getting desperate so i ran the game with sim settlements and sim settlements conqueror loaded last and it still didnt work telling me that i had installed it wrong... end staid of doing a proper manual download and install i had downloaded it manually.... before posting it in vortex and letting it handle it and it messed up the file....somehow....... i guess i trust vortex to much and that blinded me to the source of the problem... (i feel like a idiot) im preparing my game for manual install the right way..... but.......... have a look at this pic i dont know which version of the files to add the lines to..... what is the difference between a baked file and a base file??? i will wait for your response before doing anything.... 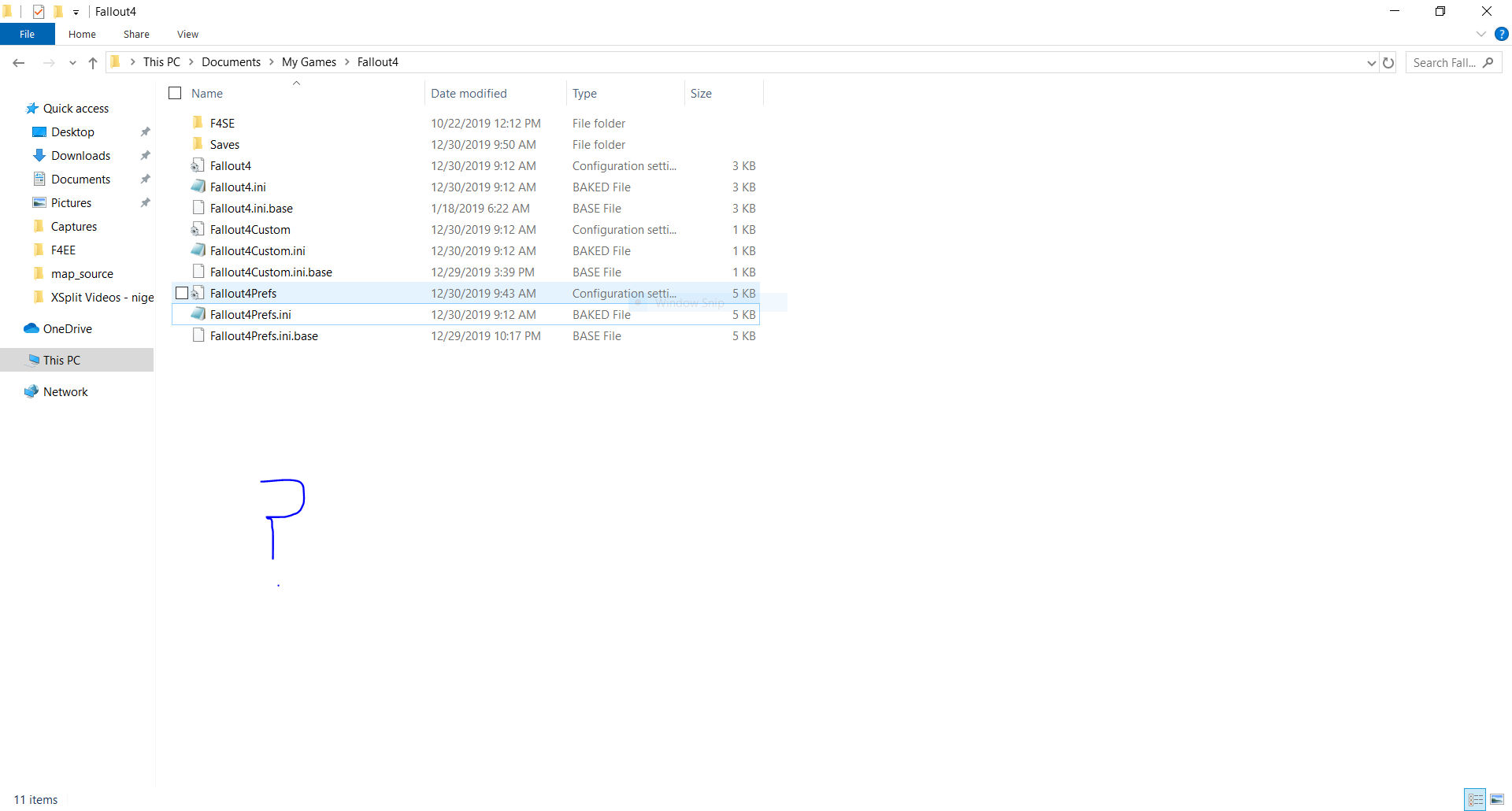 i dont know how you can put simsettlements last, as thats a master file not an esp. how are you altering your load order?
Upvote 0 Downvote
N

it is.... complicated..... over the past day ive been researching vortex and i found a function to force any file to go anywhere dont worry i put it back when i was done.....

edit never mind i miss understood the tool it simply overrides puting masters after non masters.... that said could i be on the right track here??? i honestly dont think there is anything elts left to try
Last edited: Dec 30, 2019
Upvote 0 Downvote

vortex will not, under any circumstances, put a master file last in a load order because that is not how they work.

sim settlements should load with any other master files, directly after the game files. putting it anywhere else in your load order will mean that your game is broken.

can i ask - have you modded a game before? i am not being snarky here, but i've read your posts and what you are going through sounds horrific, but it can be remedied as long as you follow some instruction.

here's a snip of my load order where i show you where simsettlements is;

These files are all master files (ESM or ESP flagged as ESM) and are high up in my load order, directly after the game files. This is the only place master files can go and work correctly.

Conqueror is somewhere down in my load order with other ESPs.
Upvote 0 Downvote

If I were you, this is what I would do right now.

1. Disable ALL mods. All of them.
2. Purge mods via Vortex, so that your game is free from all mods.
3. delete your data directory in your fallout 4 game folder.
4. have steam validate your game folders.

at this point you are completely mod-free

5. install simsettlements, workshopframework,hudframework & conqueror - no other mods at all.
6. start the game.

at this point, conqueror should kick in and you can set the game up as you see fit. do the starter quests go to the vault, stay there until conqueror has completed its stuff. this can take a few hours, depending on how many city plans you've got it setting up.

when conqueror completes, stay in the vault, and save the game

leave the vault, go to sanctuary, do the quests with codsworth up to the point that he sends you to concorde.

you can exit the game and restart it here - go to concorde - see if jammer is sitting on the roof shouting at you.

at this point you know conqueror is installed correctly.
Upvote 0 Downvote
N

yes i have modded a game before BUT... aside from skyrim on my xbox one (yes i play skyrim on xbox but fallout 4 on pc) ive never had any problems (with fallout 4 i mean) i geuss ive just been very lucky thanks will try your rather drastic option pronto
Upvote 0 Downvote

okay, its all good. this method will get you up and running with a game that only has those mods installed. the idea here is to get you back to a vanilla install of fo4 and make sure that works - thats your first building block - then install just those mods you need, thats the second building block.
if your mods are working at that point, you're free to add mods as you see fit because you know your game is working.
i would add your mods one at a time, then load the game to make sure its working after each mod has been added, just for a layer of safety.
if at any point your game breaks, you should have save points that can allow you to start over, clean again;
1. in the vault before you leave
2. after completing the sanctuary quests with codsworth

these two save points are a good base for future games.
you can also look into @MrCJohn's start up games which will get you up and running in minutes and are awesome and constantly updated.
you have options to get you going, and this little website is golddust with some amazing folk on hand to get you up and going. have faith my friend.
Upvote 0 Downvote
N

so by "delete your data directory in your fallout 4 game folder" do u meen data folder or....... i just want to make shure i get this right lol
Upvote 0 Downvote

the folder.
when you use steam to validate your game files and start a new game it will get automatically recreated. i've done it ... hundreds of times. its fine. the goal here is to remove any loose files from your game folders so that you start a brand new, mod free game and validate that your game is installed correctly and works "out of the box".
Upvote 0 Downvote
You must log in or register to reply here.
Share:
Facebook Twitter Reddit Email Share Link
Menu
Log in
Register
Install the app
Top