The Slog - Biggest Crops In The 'Wealth!

The Slog - Biggest Crops In The 'Wealth!

Originally founded by Wiseman after fleeing Diamond City, the old world public pool now known as "The Slog" became a beacon of refuge for persecuted ghouls, as well as a burgeoning trade hub. Through hard work and the help of some fellow prewar ghouls, namely the famed inventor Arlen Glass and a former Vault-Tec sales rep, The Slog began expanding it's farming and trading capabilities. The chief of these efforts being the piping in of purified water from the local reservoir. With access to mass amounts of clean water, The Slog quickly increased its food production capabilities as well as sheer profits through the sale of purified water. But that wasn't enough, they needed to try something new... 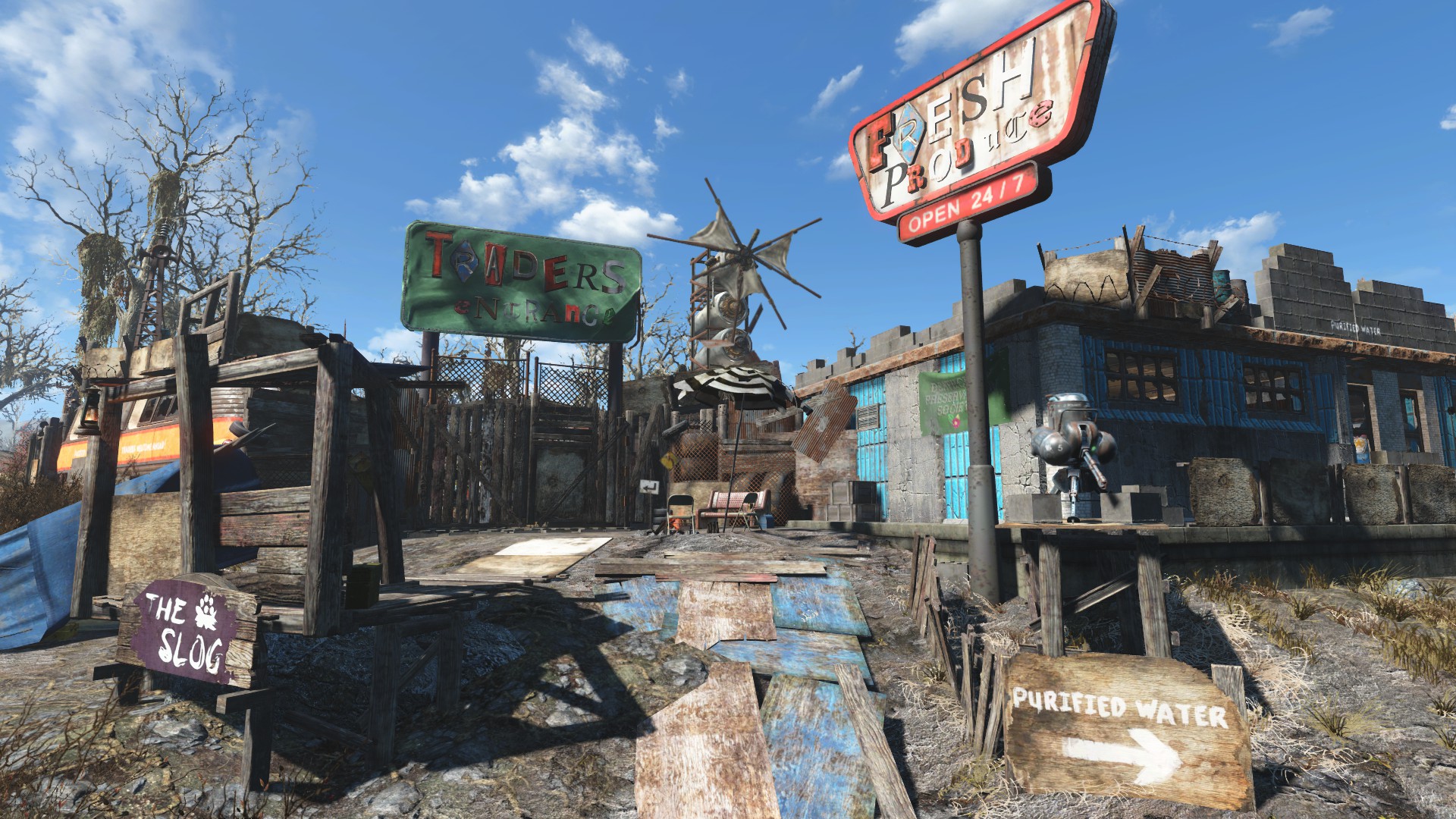 If you're a trader or caravaneer, this is usually your first sight entering the slog a well-fortified gate with convenient access to a pen to house your brahmin and sleeping accommodations nearby. 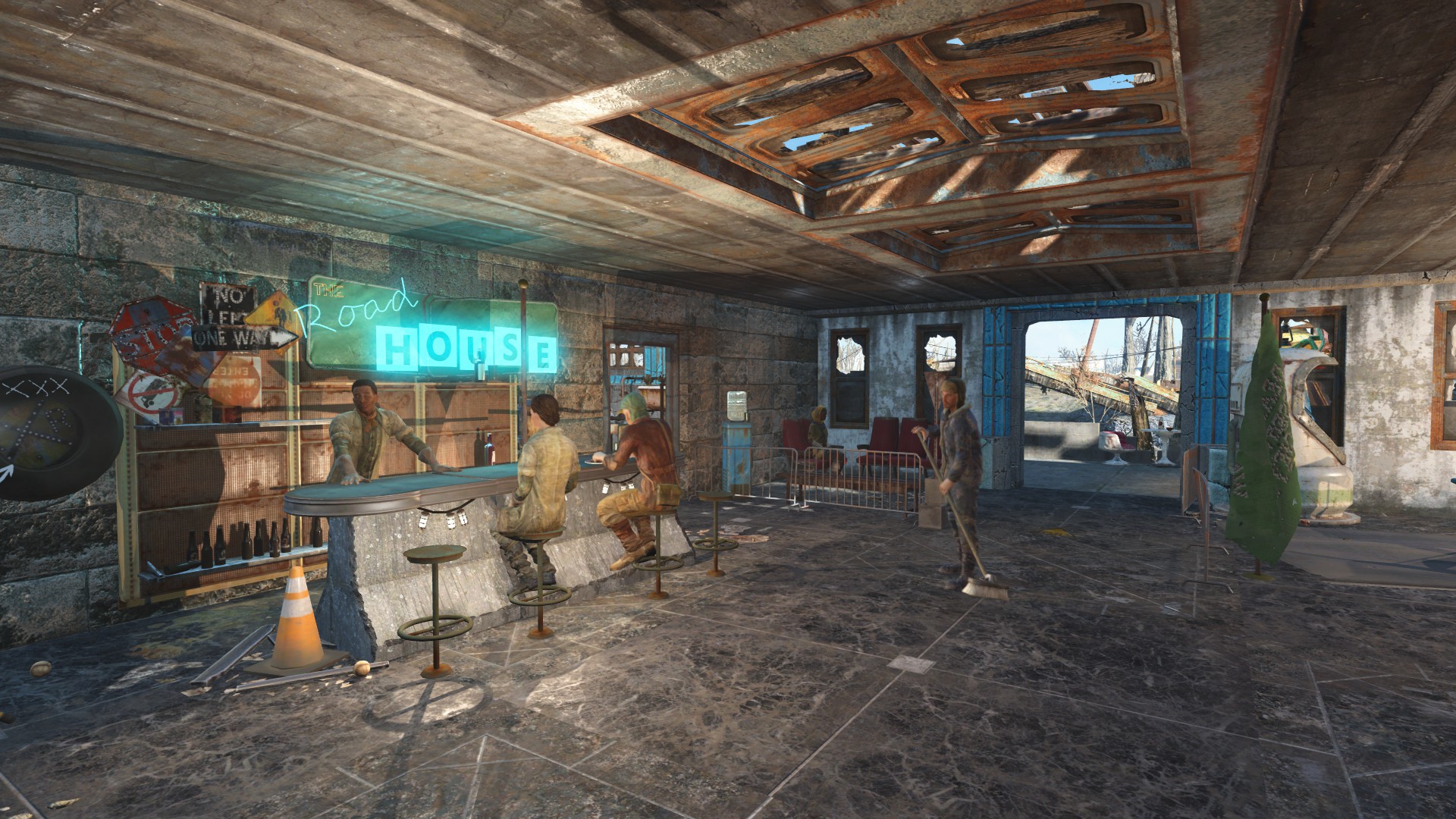 If you aren't here to trade, entry through the main doors requires a quick screening by security (don't worry we don't have any of those weird tests like those folks over in Covenant). Those patient among you will quickly be rewarded by our local bar tapped with only the finest local brews and blends. (we'll come back to that later) 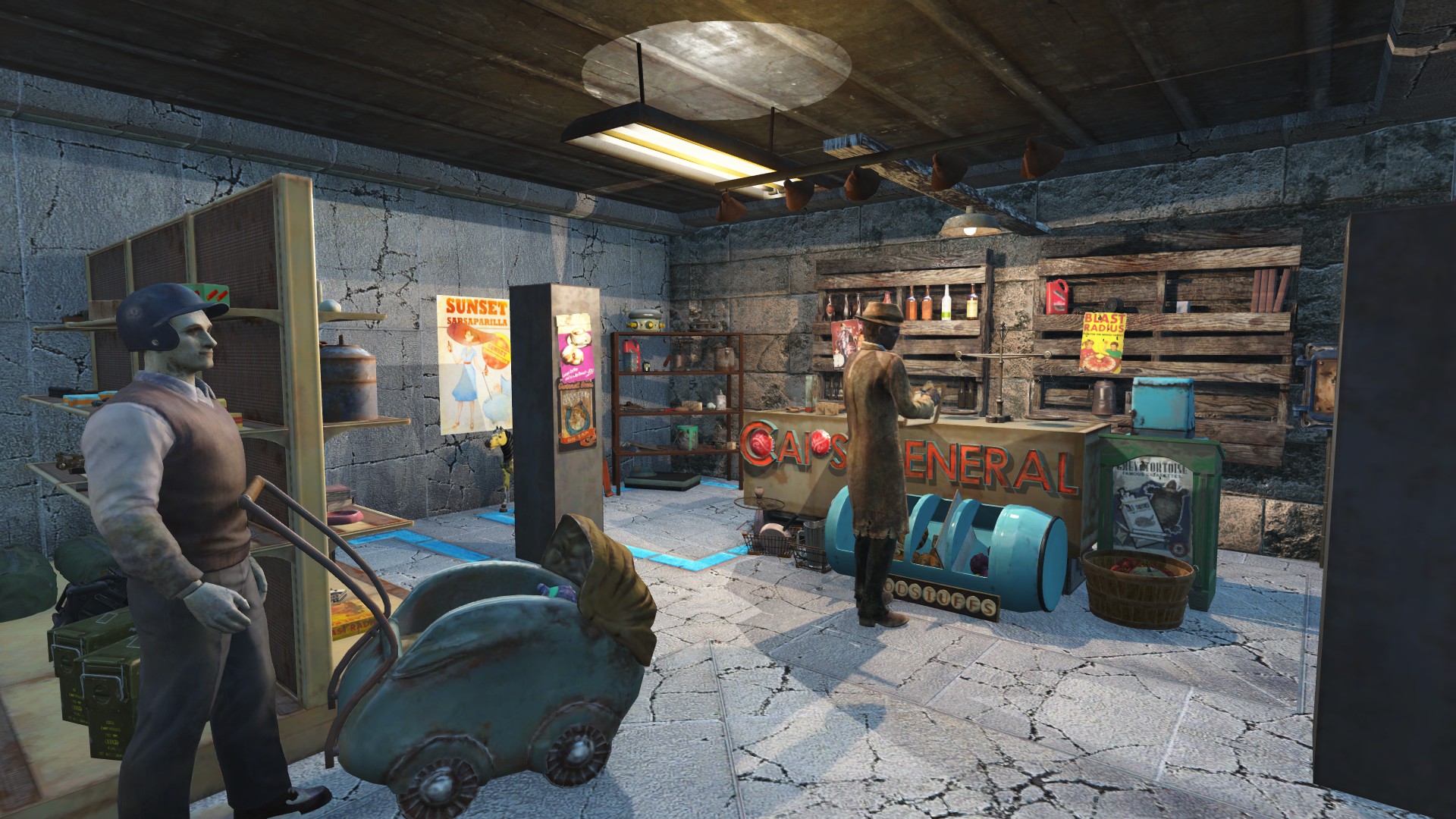 And just in case you change your mind about trading, you'll be relieved to know there are three shops conveniently located inside the main pool building. (General goods, weapons, furniture) 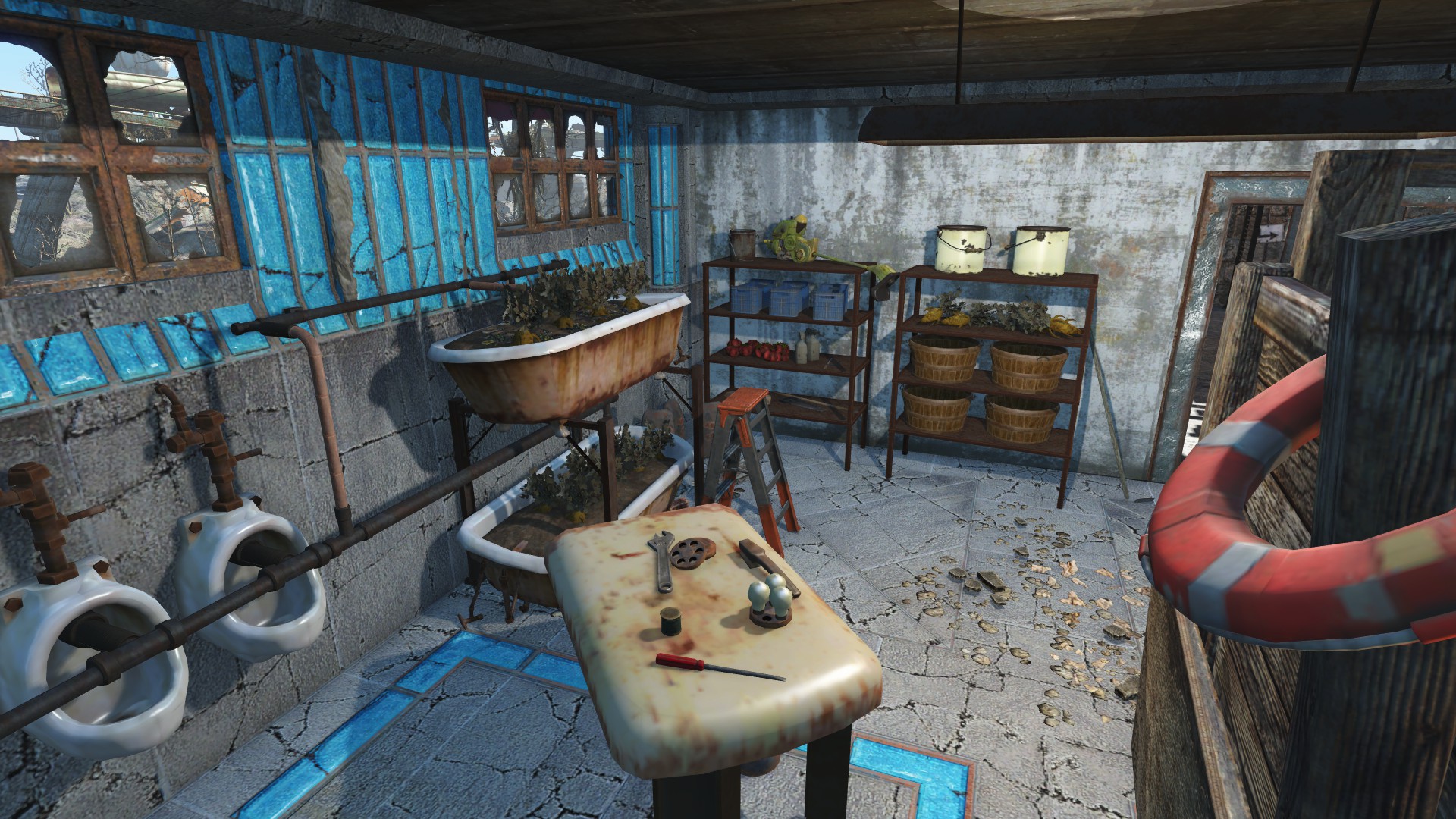 Here at The Slog space is a premium, so clever use of existing piping and plumbing is a go-to here. 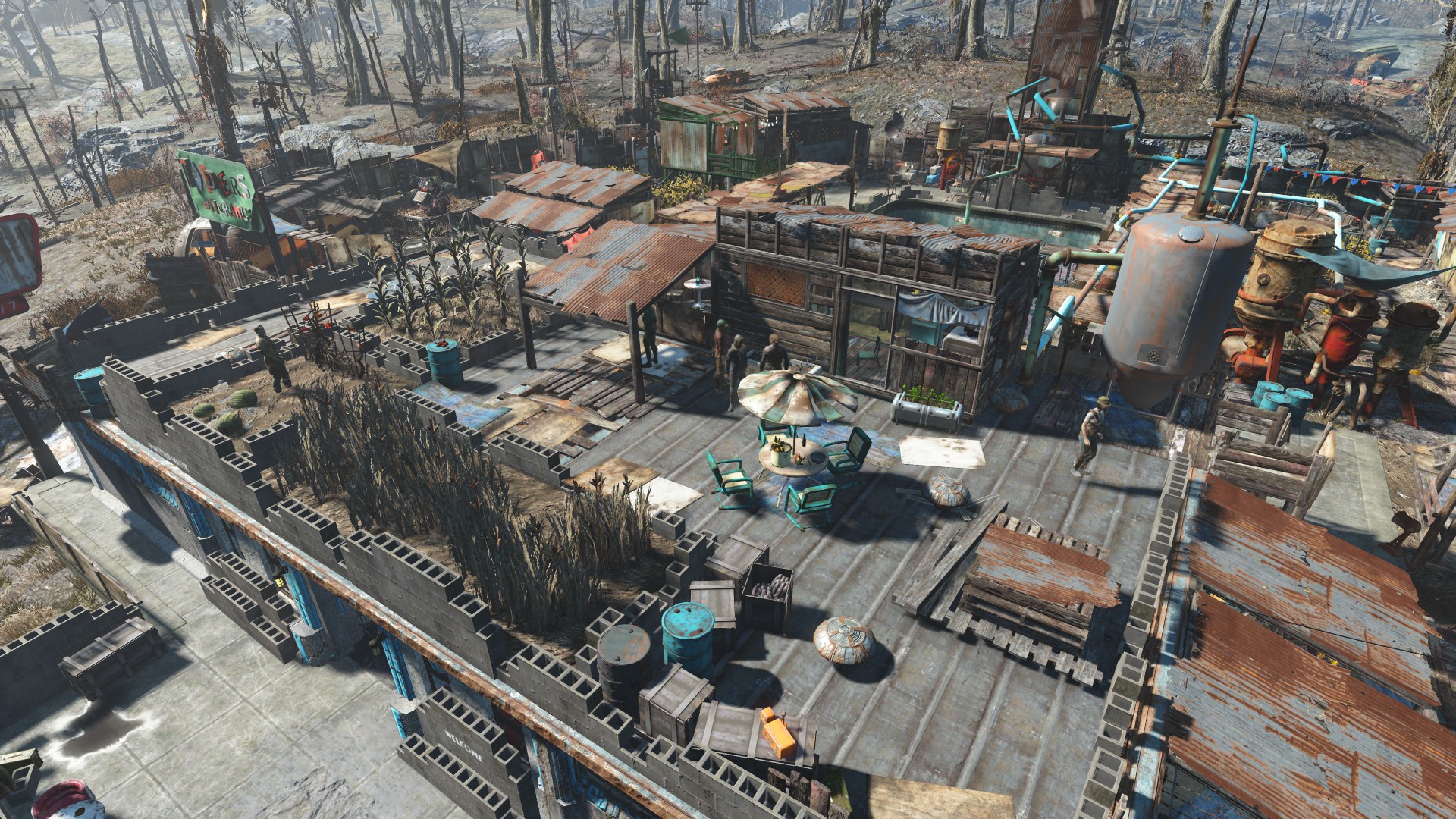 Our rooftop gardens are also one of the many ways we've tried to use our space carefully. 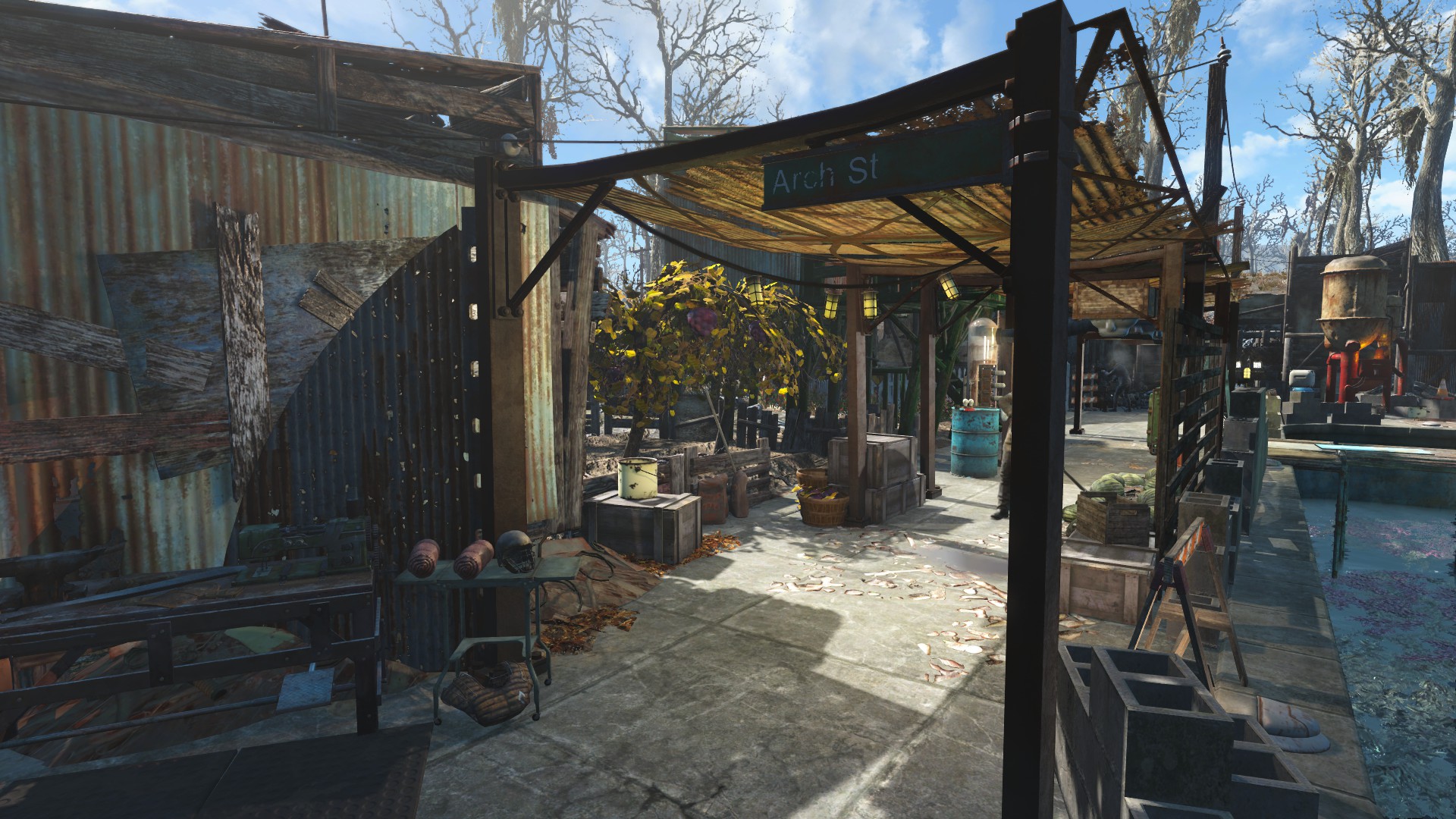 Here you can see some hints to the residents past, it would seem Diamond City security's shortcomings may be due to the mass exodus of ghouls. Nevertheless, the residents here have found a new life farming and growing crops, some of which are those abnormally large mutfruit trees. 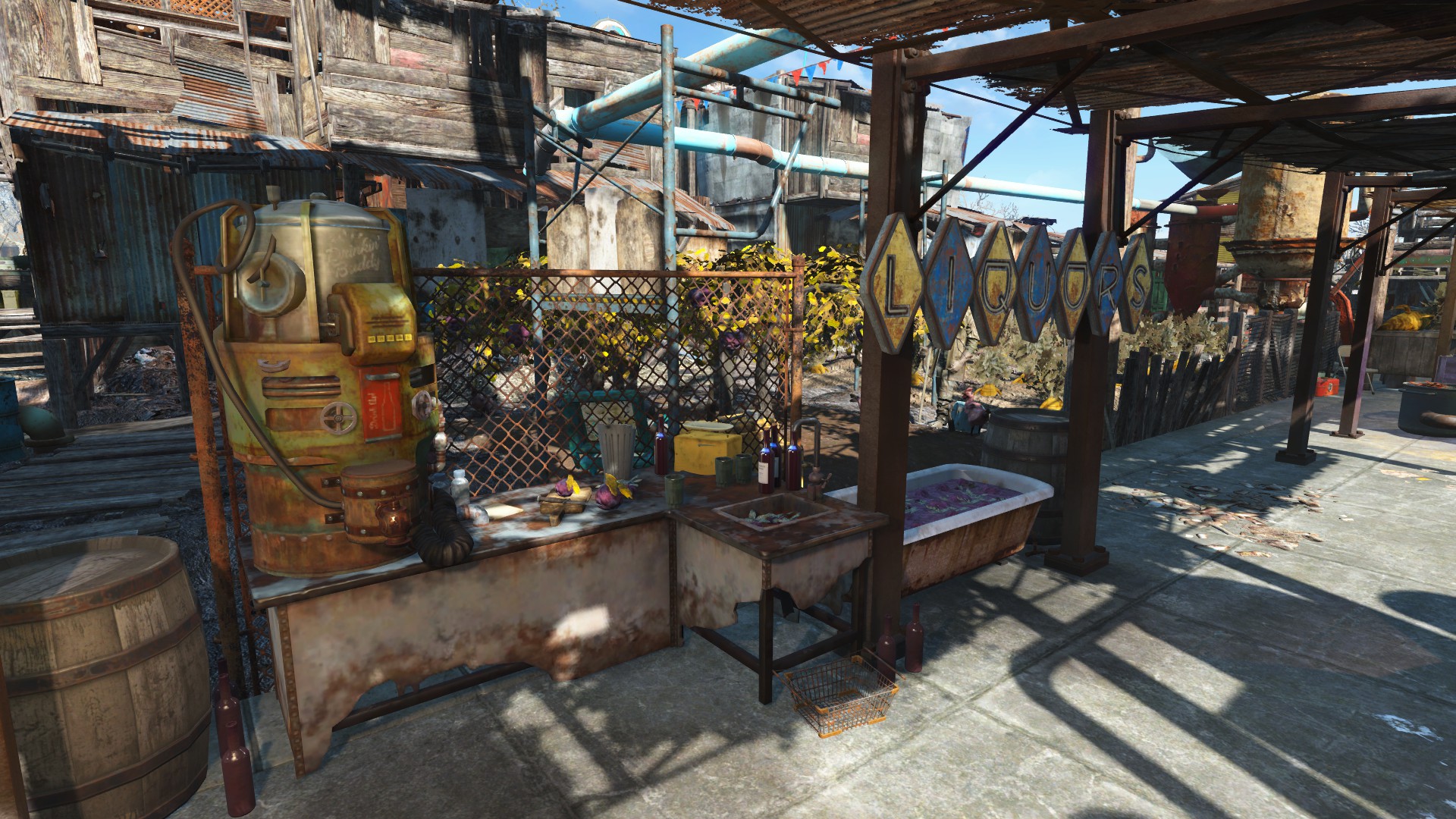 And what do we use that mutfruit for you may ask? Wine of course! Tarberry wine, mutfruit wine, take your pick! 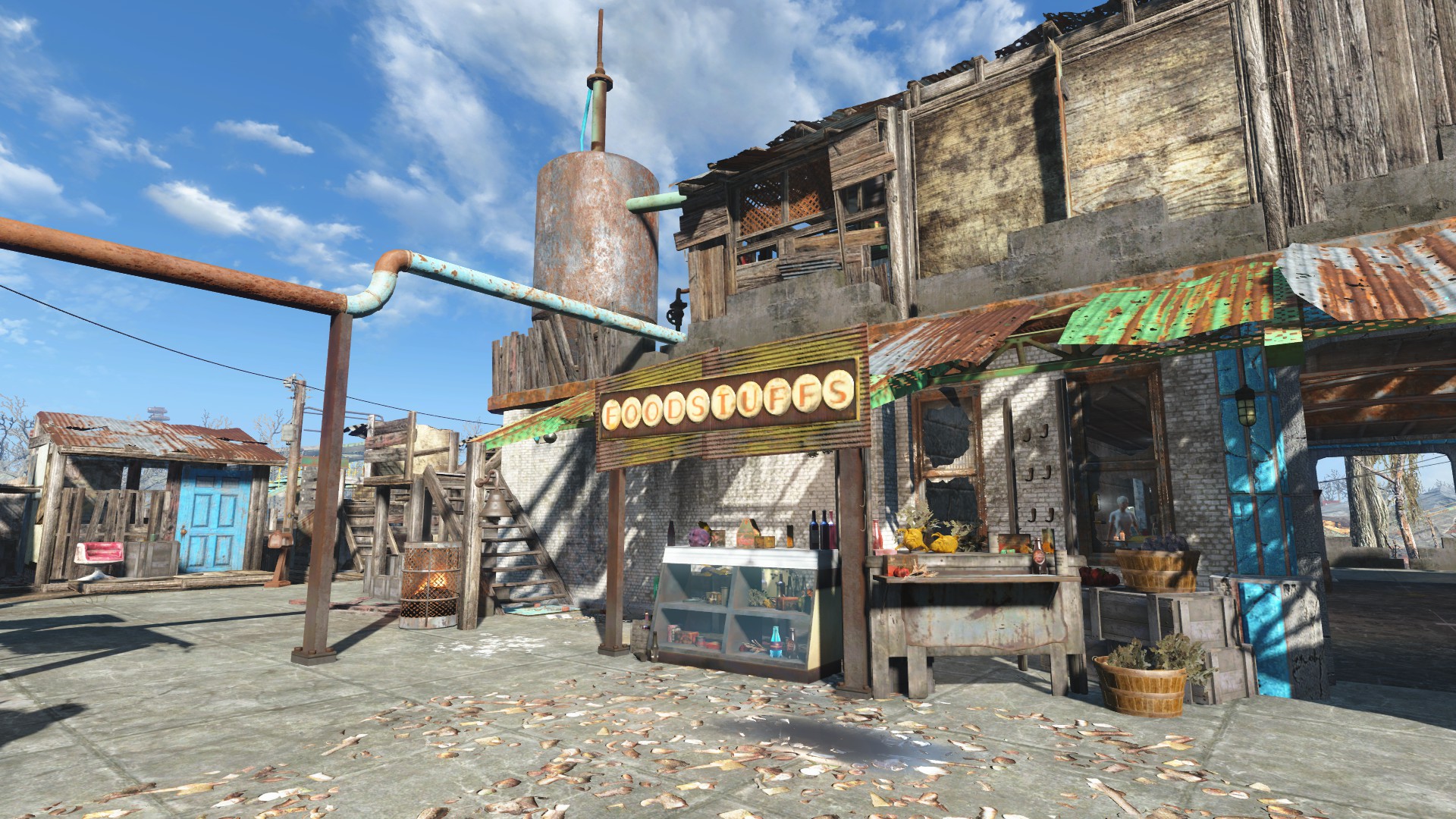 Whether you want to stock up on some purified water, a bottle of wine for that special someone, or maybe just some carrots the size of your head, stop by our farmer's market stall! 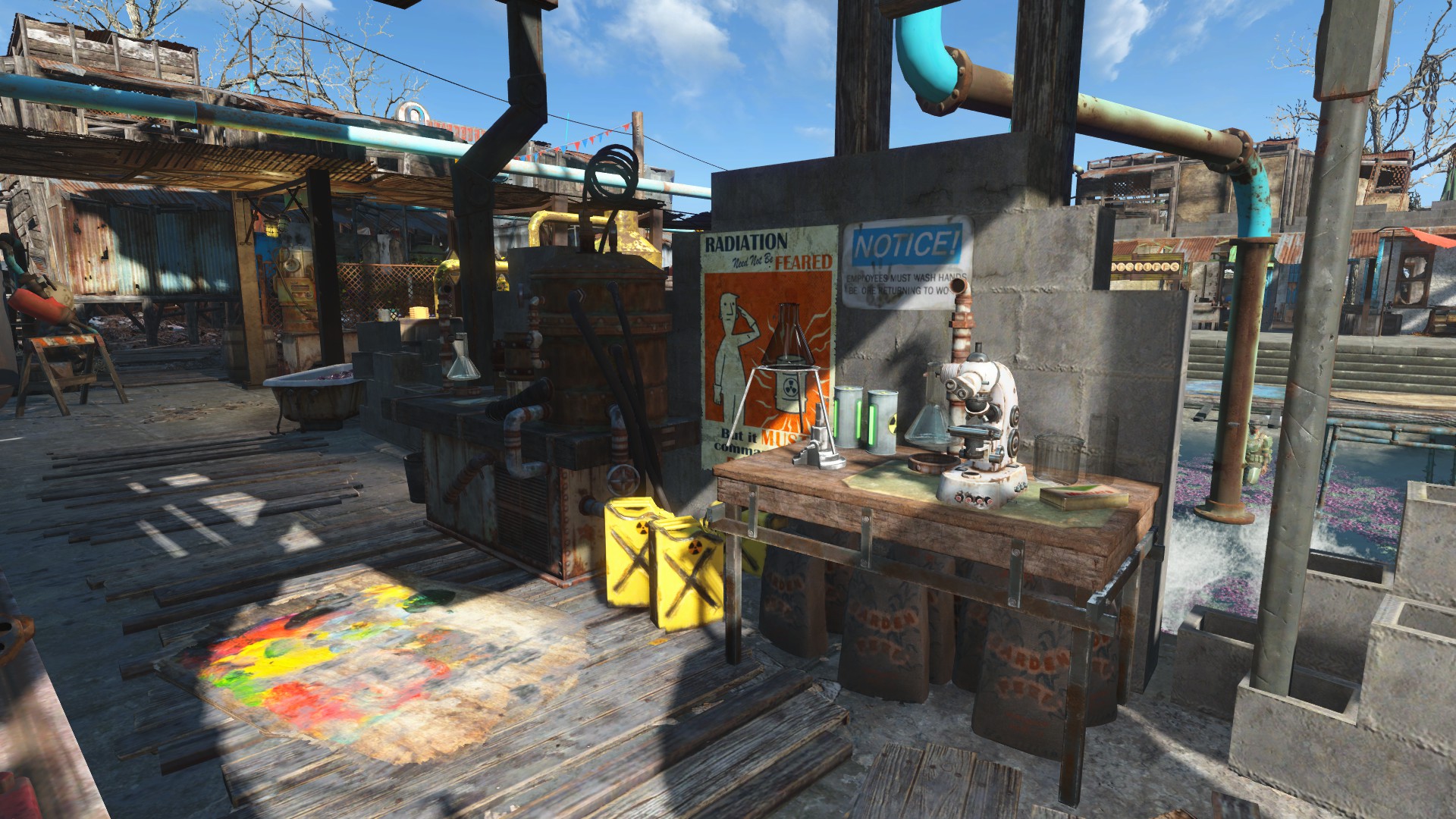 Now you may be thinking to yourself, "I've never seen crops this big anywhere else in the commonwealth, what's your secret?", well ask a ghoul the secret to long life and he'll probably give you the same answer: "Radiation baby!"

That's right, who better to use heaps of radioactive fertilizer to grow crops than ghouls!
Don't worry it's mostly harmless, just don't drink the pool water... 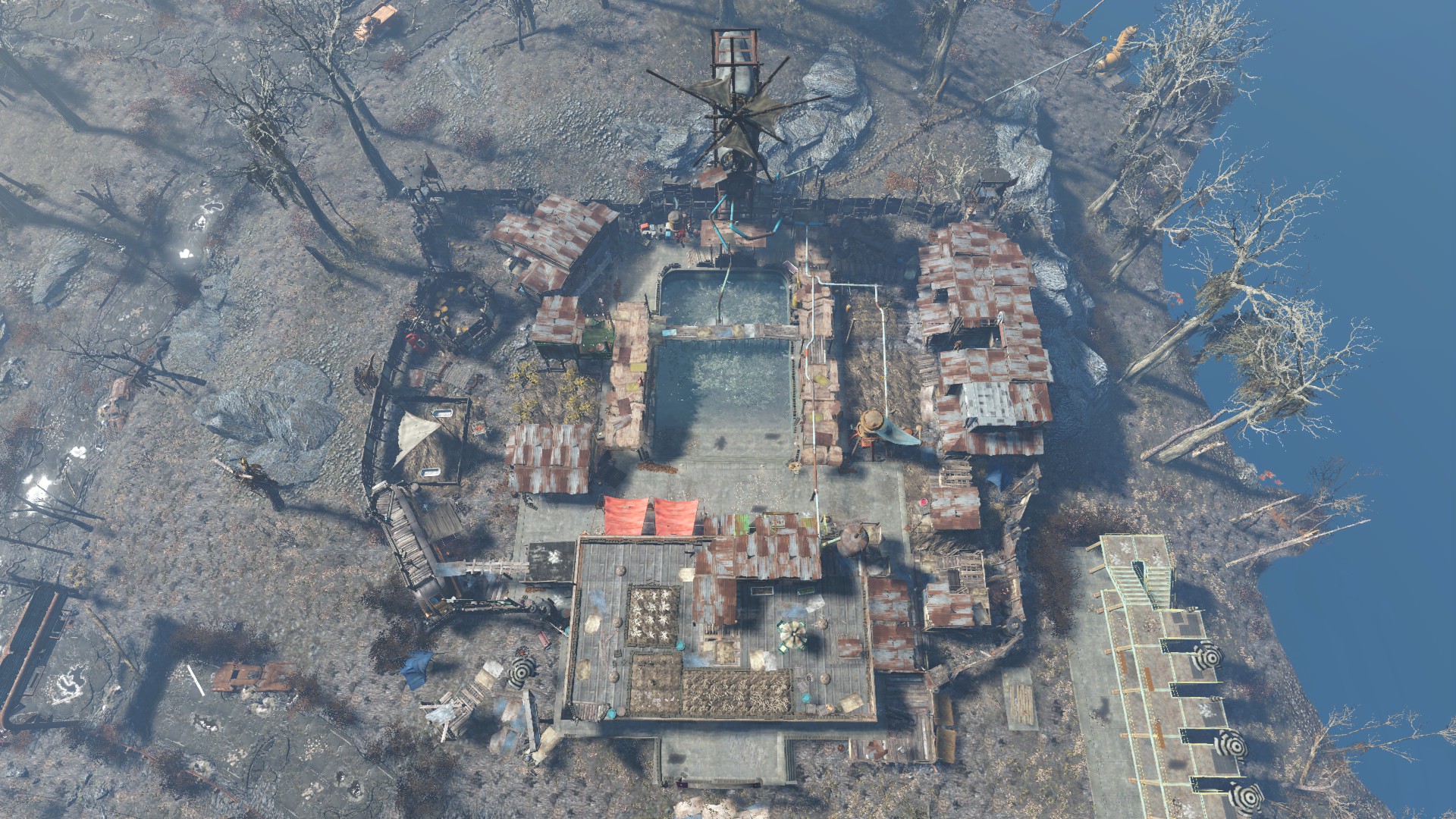 That's it, the final overview! You can just barely see the water pump in the top right corner.
The large building on the right contains most of the residents' housing broken up into 4 apartments. The building in the top left is a well-cluttered player home.

The city plan contains:
Recommended add-on packs: Wasteland Ventures All-In-One, Junk Town, Ruined Homes and Gardens, Sim Settlements Scrappers.
I'd also recommend a mod such as Leaders of the Commonwealth that allows you to make any of the named ghouls, such as Wiseman, be the city leader.

I have to say, picking only 10 photos to show off the settlement was the hardest part of the contest! I'll be adding a bunch of bonus photos so that you can get a better sense of all the tucked away areas! All in all, I'm pretty pleased with how it turned out, my only regret is not making the diner out front into the player home! I can't wait to see how all the other builds turn out

Welcome!
You don't have much to be nervous about. Everyone entering is super helpful, so if you have any questions ask here and one of us will help you out.

Phil_T_Casual said:
Welcome!
You don't have much to be nervous about. Everyone entering is super helpful, so if you have any questions ask here and one of us will help you out.
Click to expand...

Thanks for the warm welcome! I'm about 95% done on my build limit, just trying to finish up cluttering a few areas. The regression part is going to be the most interesting I think.

I just realized, do plot levels directly affect build limit? I just changed some of my interior plots, which reset them back to level one, and now I'm pretty sure my build limit went down...

Yes they do, that's why I level up plots immediately when I place and assign them.

Is there a way to force plots to level up via console commands? That way I know if I'm accidentally over the build limit now.

I'll message you with it

Oh my, this idea is intriguing and VERY 'Fallout.' I'm really looking forward to this entry!!

Some say the crops owe their unusual size to some old world science, others believe they're blessed by the divine... 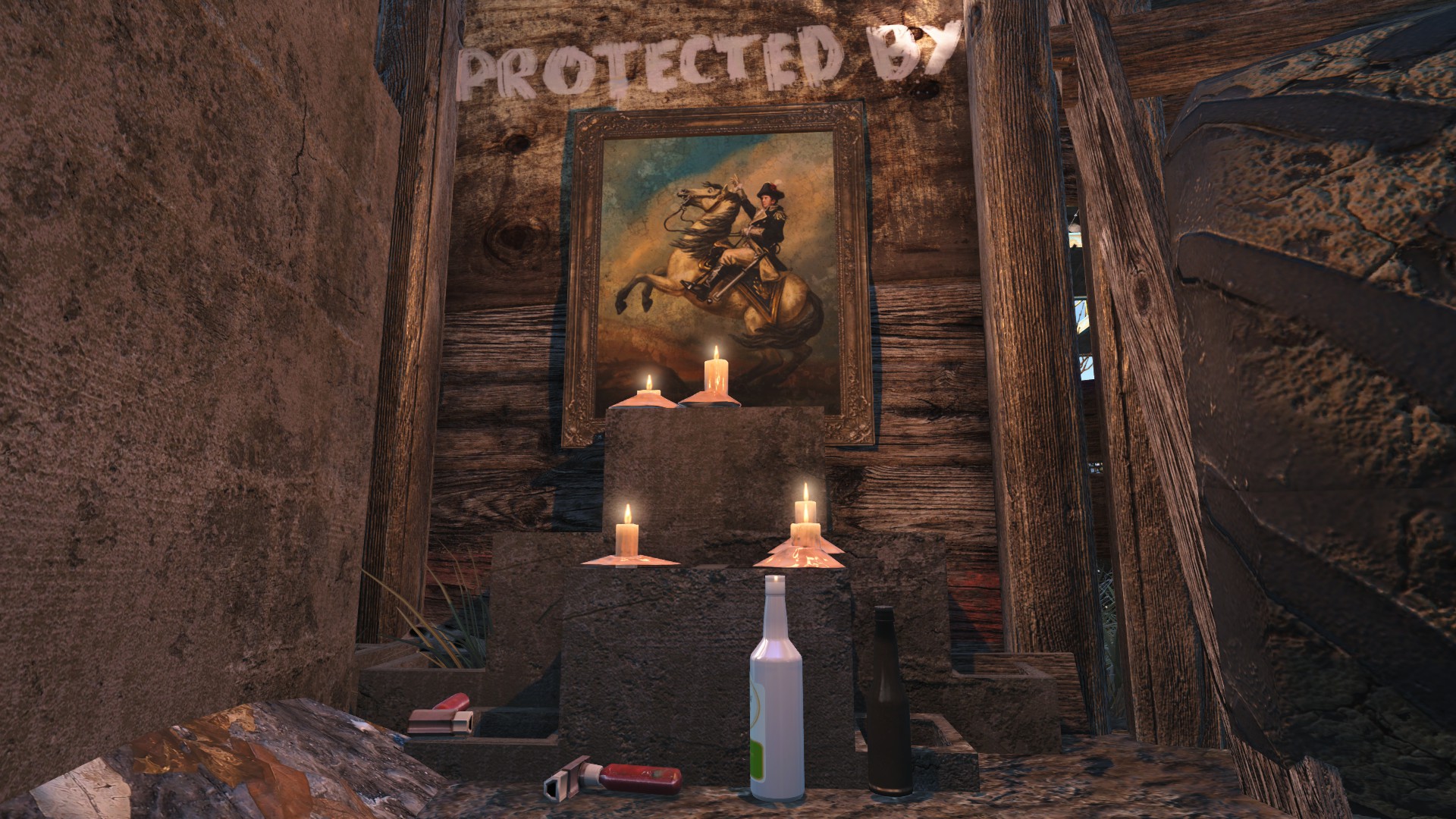 Lost two of my settlers in a super mutant attack (damn you super mutant redux!), so I decided to give them a proper burial. At least what was left of them... 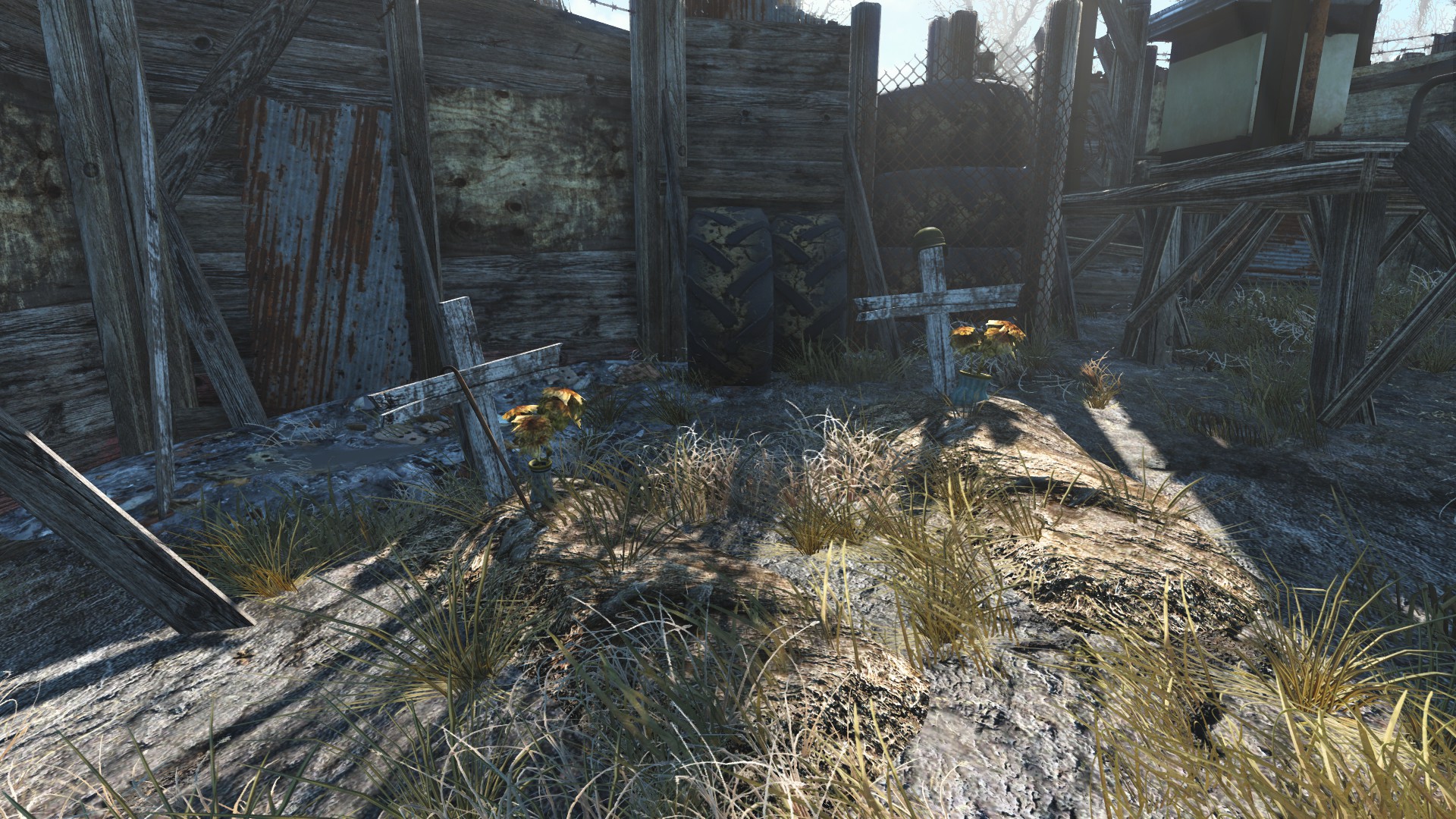 Time to begin the arduous task of exporting my city levels, but it's finally all coming together! 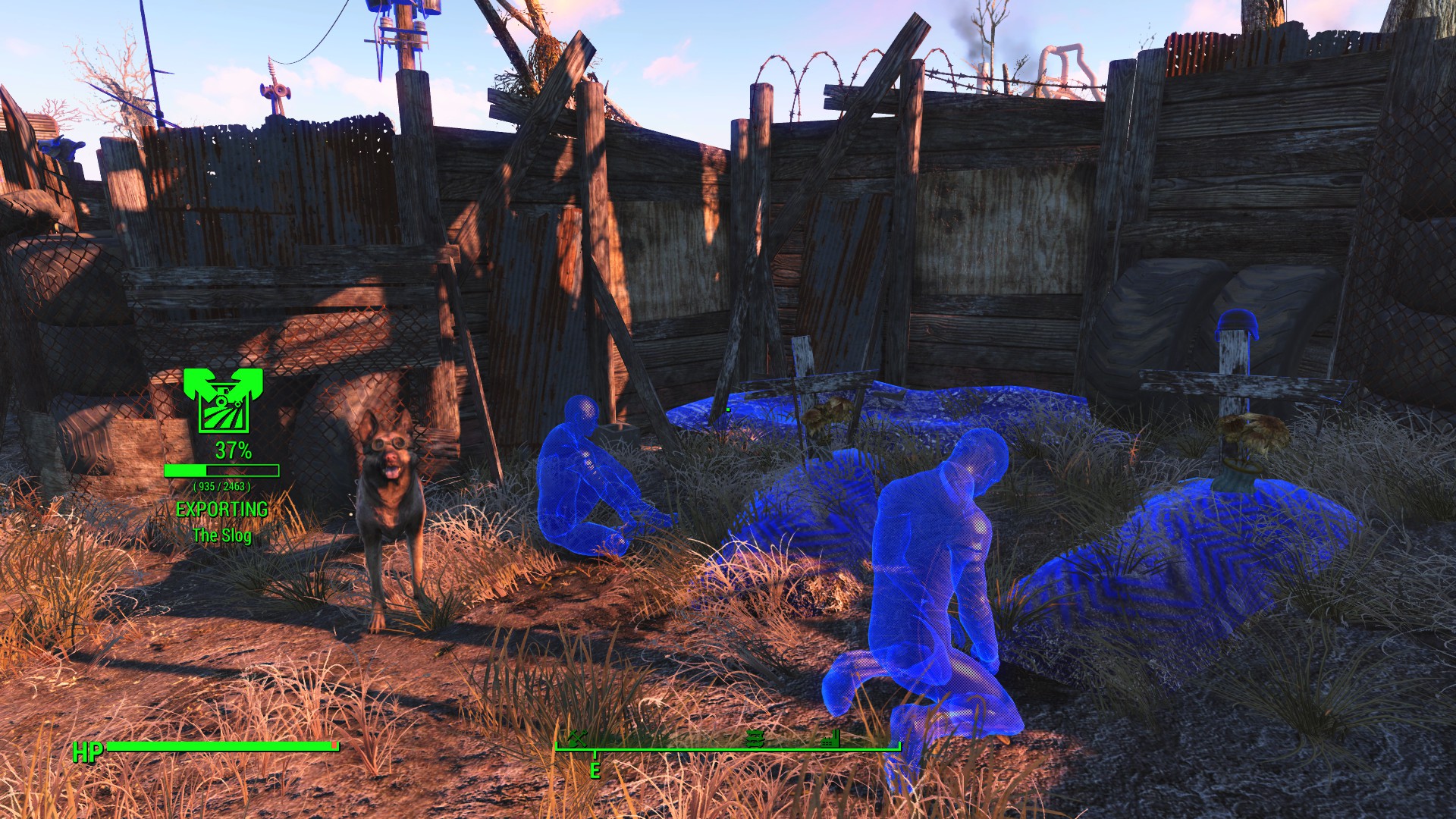 I'm getting excited to see the rest of this!

Alright, I'm sure I probably just did something wrong, but after using the esp I created and building it on a new save, I'm getting weird results with some of the original items placed at the settlement.

For instance, these chairs were moved but not scrapped and now there appears to be a duplicate set?: 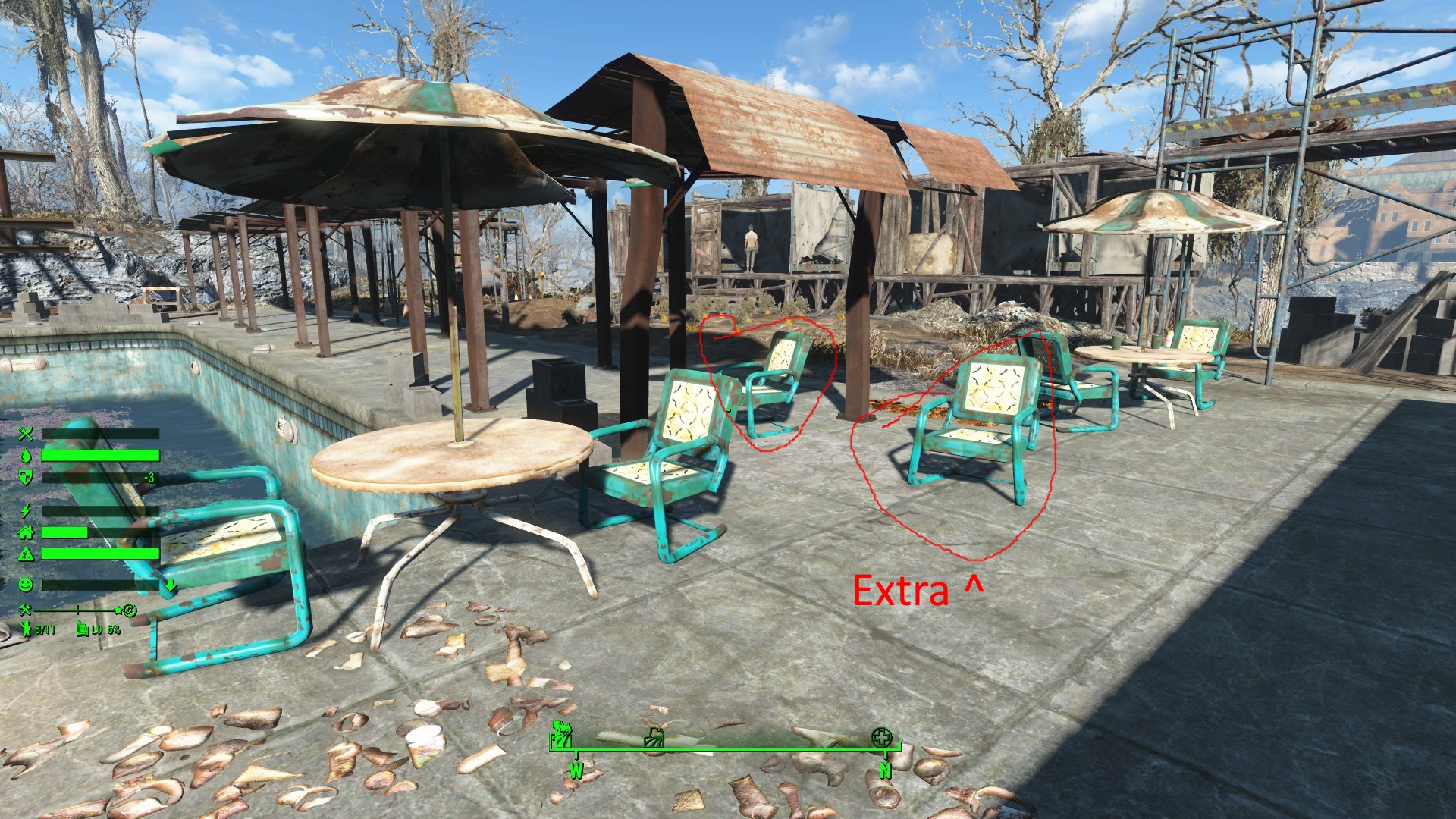 Also, I scrapped these bathroom stalls but now they're back?: 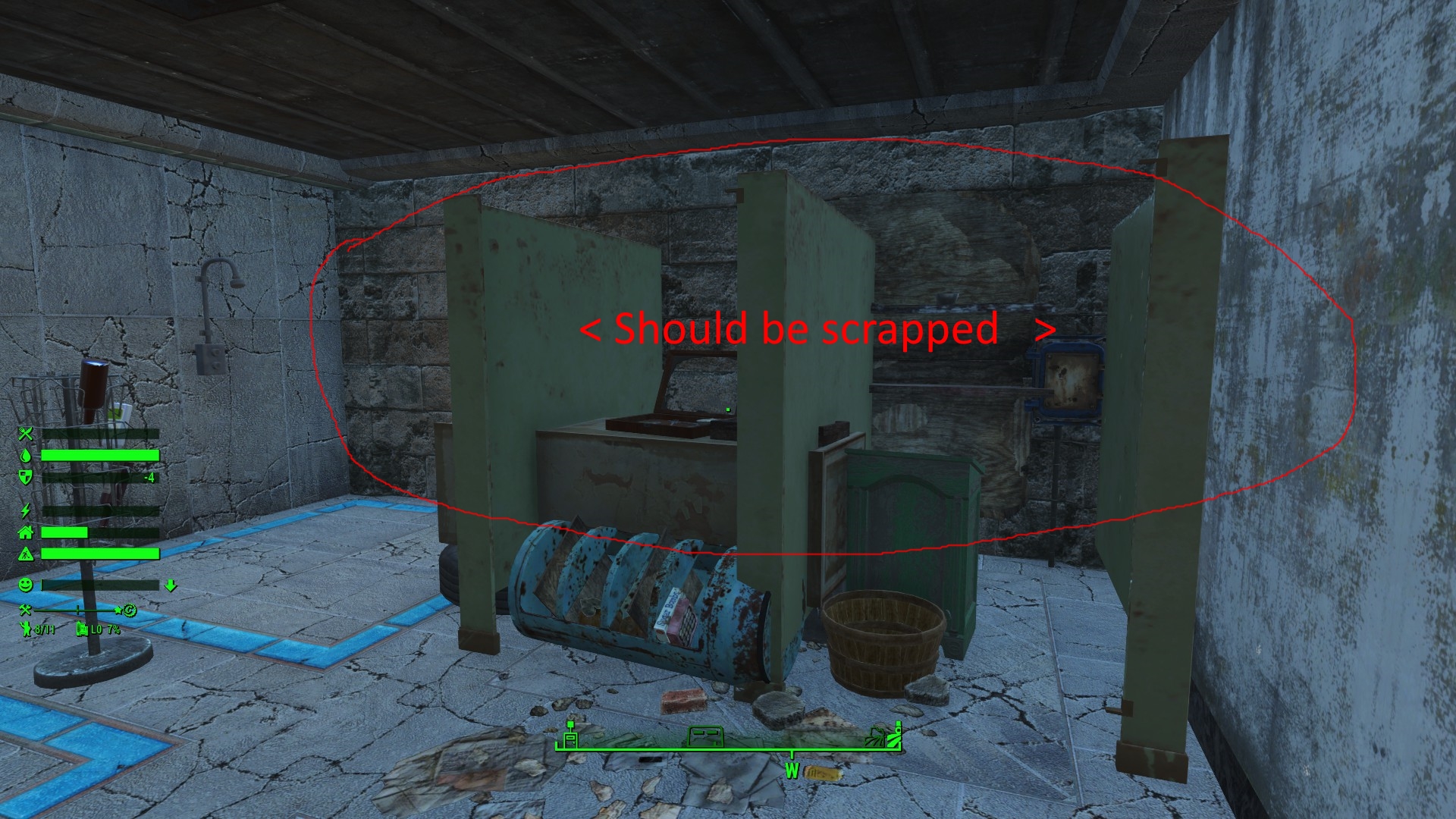 The lockers that are normally there are also missing: 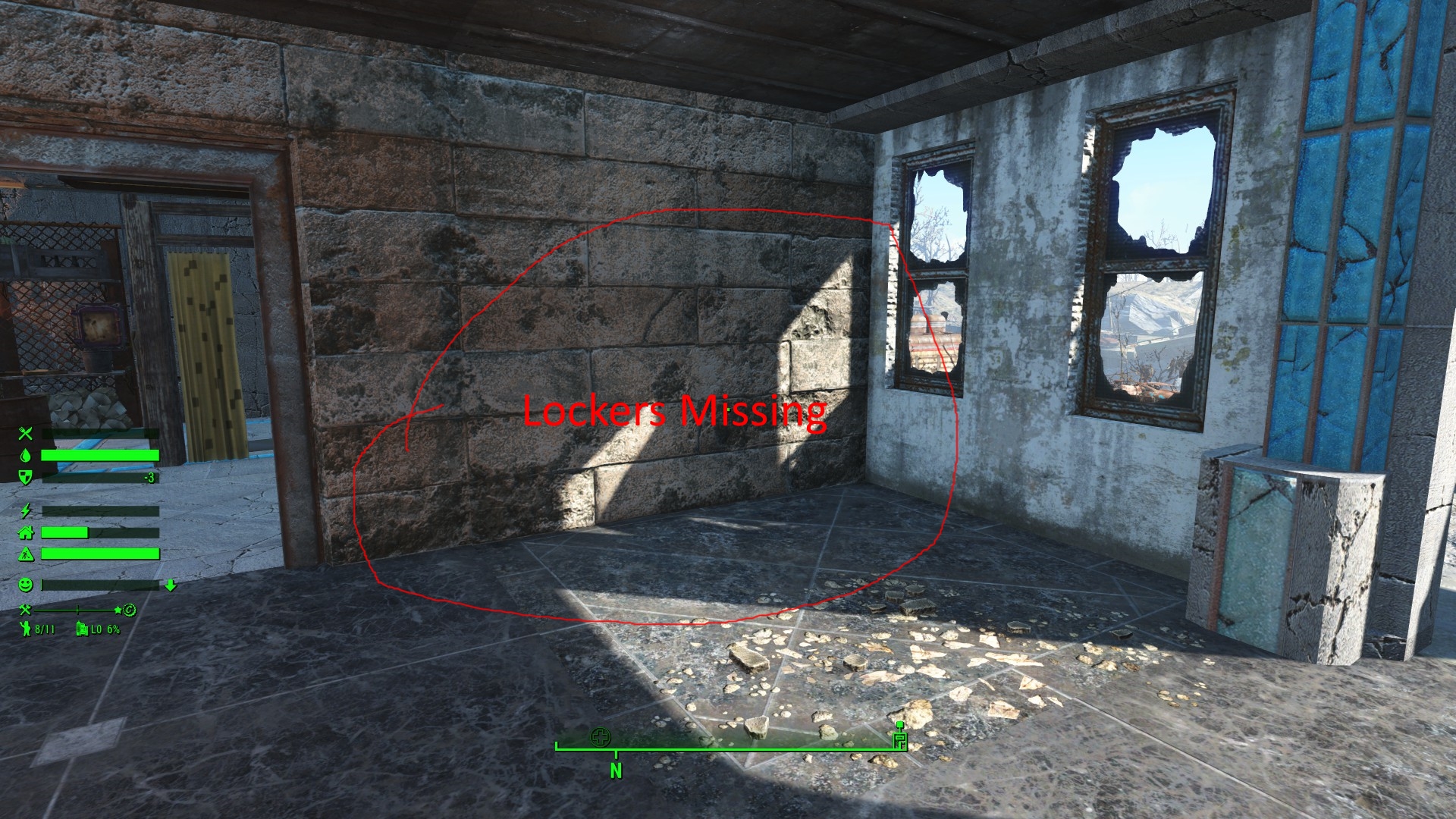 Does anybody know what's going on here?

Did you create a scrap profile or use the one in the tool kit?

I created one, but I didn't create a scrap baseline because I wasn't using any scrapping mods.
I did reimport my level 0 blueprint onto a new save so that I could incorporate some of the original objects then re-exported that to use in the esp, could that have something to do with it?

Do you use extra object selection in Place Everywhere?
Now I'm not 100% on this, but if you used that to scrap something you must have it enabled when creating a scrap profile.

I do use it, and I usually toggle it back off so I don't accidentally scrap something important.
So, in theory, I should just recreate a scrap profile with my level 3 save and make sure it's toggled on?

As I said I'm not sure, it's worth trying, plus the scrap profile is the fastest to create.

Well, no luck with creating a new scrap profile. I'm going to try fiddling around with my saves, maybe try importing the later city levels and then re-exporting, hopefully I can get this figured out.