This is a work in progress. Information-gathering and fact-checking will be ongoing. Also making it all look prettier.

More categories will be explored as I learn more. Rearranging is highly likely.
Last edited: Sep 28, 2021
Click to expand...

* If your textures DO NOT include alpha, save the file as DXT1.

* If your textures DO include alpha save the file as DXT5.

* Normals are almost always DXT5 since they have alphas for the shine values.

* Skin files are BC7

* BCx files won't compress at all on XBox but DXTx will

* XBox can run BCx files, they just take up more space and have worse performance

* And always generate mipmaps for XBox

* Textures - Color or "diffuse" Textures, the colors that appear in the game.

* Alpha - this is for transparent parts of a texture, like seeing through holes in a flag or a piece of clothing (like the holes in a belt).

* Normals - Normal Maps, this is a way for a texture to describe 'bumpiness' and shadows. Essentially dips and ridges and various shadows can be described in this type of texture. It effectively determines how smooth things are.

* Specular - Reflection maps, this determines how shiny or reflective a texture ends up looking in the game.

“And always generate mipmaps for XBox.”

* You definitely want mipmaps. Even if they take up more space, they drastically improve game performance.

* Mipmaps were originally intended as a quality-at-a-distance improvement, the game performance came as a side-benefit.

* If you don't generate mipmaps everyone has worse performance, both on PC and XBox.

Question: What is the side-effect of no mipmaps?

* With rasterization (generating on the fly) the game engine says “render this” and the graphics card does a “what pixel in the image” math - it may look odd or different every time that the game has to rasterize that object.

* A good mipmap generator pre-determines “what pixel is important”, making the image look better from a distance.

* Without mipmaps it can look strange from a distance, plus you get really bad game performance. The XBox gurus will recommend that users don't use your mod. This is not because your mod/textures/etc are awful looking - it is strictly from the perspective of game performance reasons, XBox players need as much performance as possible.

Things will still work without mipmaps. However the game could be trying to render that 1k texture on a 3 pixel tall building model half a mile away.

Essentially you as a mod author are making the game engine struggle by forcing it to resize your textures on the fly. A lot of non-mipmap textures will drop the player's FPS dramatically while the engine resizes things to cope.

Performance is much more critical on XBox than PC. If you're going to damage the intended performance systems then don't publish for XBox.

While space is a concern (especially with the XBox's 1GB mod limit), mipmaps are too important to do without in exchange for a smaller mod.

Most users would have no way of knowing that your textures will cause reduced performance. Users therefore have no way to provide you with that feedback, that there is an issue with your textures/mod.

Never publish 4k for XBox. 2k is the max and should be used rarely.

Have you ever noticed an object with a somewhat blurry looking texture that then suddenly looks detailed? That's the mipmaps at work.

(Whisper) An addition - if the item is small (like a bottle size?) then you don't need 1024 or 1k size - 512 or 1/2k size should be plenty. (Probably less is needed - players aren’t going to be regularly looking at a bottle, fuse, screwdriver, wrench, etc at close range - it’s a waste of space plus causes their hardware to struggle loading large-sized textures.)

How the game loads textures, damanding:

The game loads the mipmaps first and then the full texture as you're closer. If it's having to load the full texture even from far away, that's worse for performance in general. (This in relation to not using mipmaps in your textures.)

* (If you have no mipmaps with your textures) Redo all your textures and add mipmaps, everyone will love you for it.

* Also if you're using GIMP, use a recent version of it, older versions of the program broke mipmaps.

When you get close to a wall, the game has to start magnifying (aka upscaling) the image. Since the basic detail is not there everything gets blurry. The way to fix that is to have a higher resolution image of the wall - at the cost of bigger filesize.

When you get farther away the game starts downscaling the image. When that 1k image only covers a 512x512 area of the screen the graphics card/cpu starts to work. They work harder when things are at 256x256 and 128x128 areas of the screen.

When that area of the screen is only 3x3 pixels size it is doing a lot of calculations to reduce that 1k image down to 3x3 pixels.

To save the computer/console from grinding hard when it tries to render that 1024x1024 image to cover a 64x64 area, the designers of the game did something really smart: they pre-generated lots of smaller images and saved them in the dds file. These pre-generated smaller images are called mip-maps.

What the mipmaps do is add progressively smaller images into the same file (so that the system doesn’t have to keep track of lots of files of different sizes).

Each smaller added file is half the screen resolution of the last, all the way down to a 1x1 pixel “image” that is a wall of that 10-story building a mile away in the game. So the standard 1k file packs together a bunch of pictures of these sizes:

If the original full-sized file was only 1mb size, adding all of these extra images into it will increase the file size by only 1/3rd. This turns a 1mb file into a 1.3mb file - slightly more size and much easier for the game to deal with. 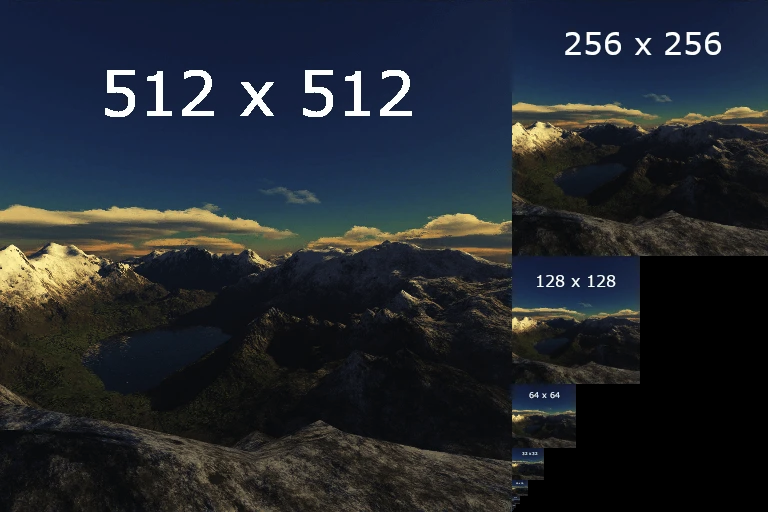 You will note that all of the images described above are square and in multiples of two. This is a built-in part of the optimization system. While it might seem like a good idea to shave off a little image size by using a smaller image (example: 900x900 base image size) this also breaks the game optimization. It causes the system to work harder, may cause the images to look weird, and might cause game crashes.

Ditto for not making mipmaps at all in your images.

When choosing what size of texture to put up, take into account the size of the object and how close the player will likely get to it. A 4k 10mm bullet texture (for example - I've not looked to see if there actually is one out there) is humorously silly in this context and is a waste of system resources.

What Size Should I Use?

This depends on the importance of the item. (Thanks to kinggath for helping me clarify this in my head.)

It can vary. For example: 10mm ammo

(Which leaves me with the perplexed question: Who on earth is faceplanting into a dropped 10mm cartridge to see all that texture? Don't answer.)

The base game is not always consistent. For instance, the Shuckeys Clams refrigerator magnet is 2048x2048 and 5.33mb size: 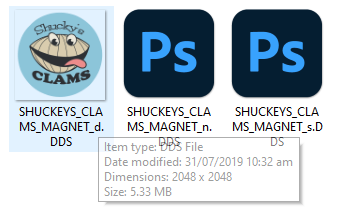 Most of the important stuff is 1k, image compression varies: 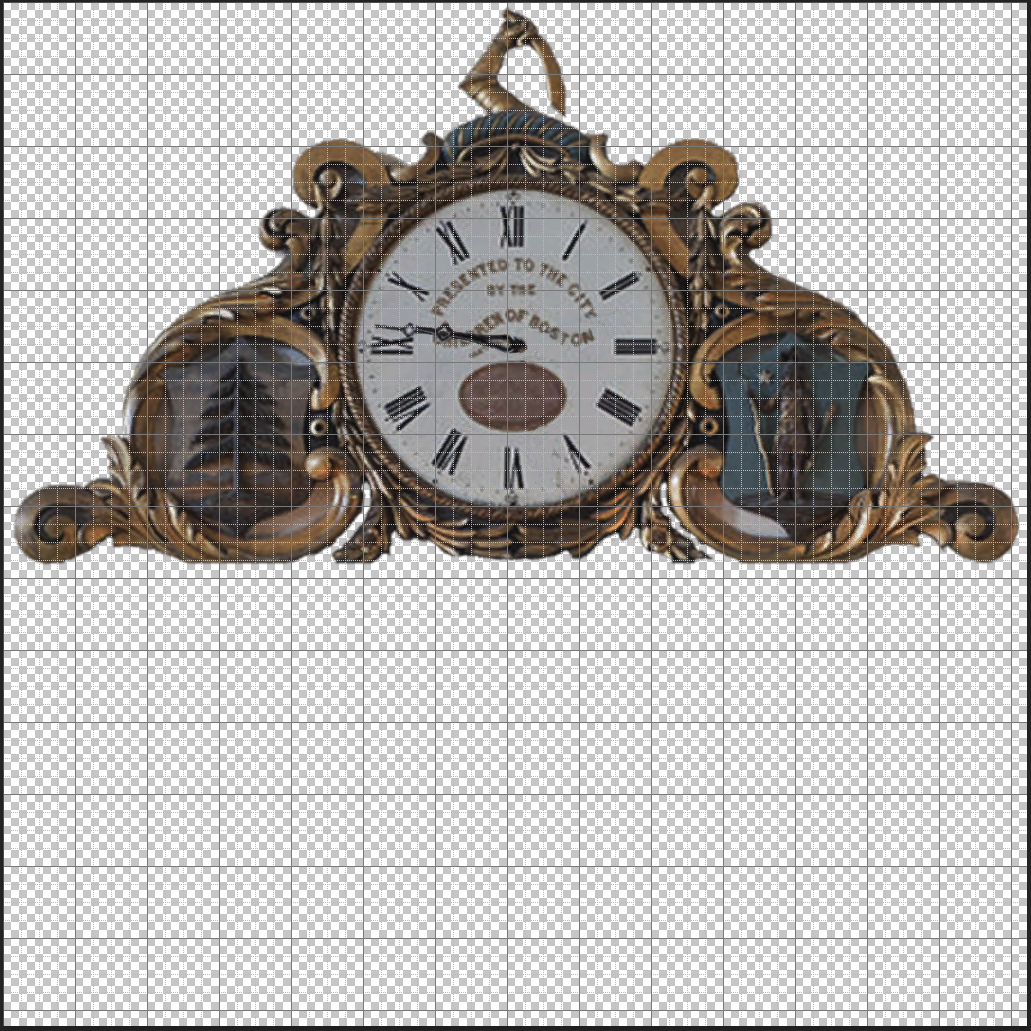 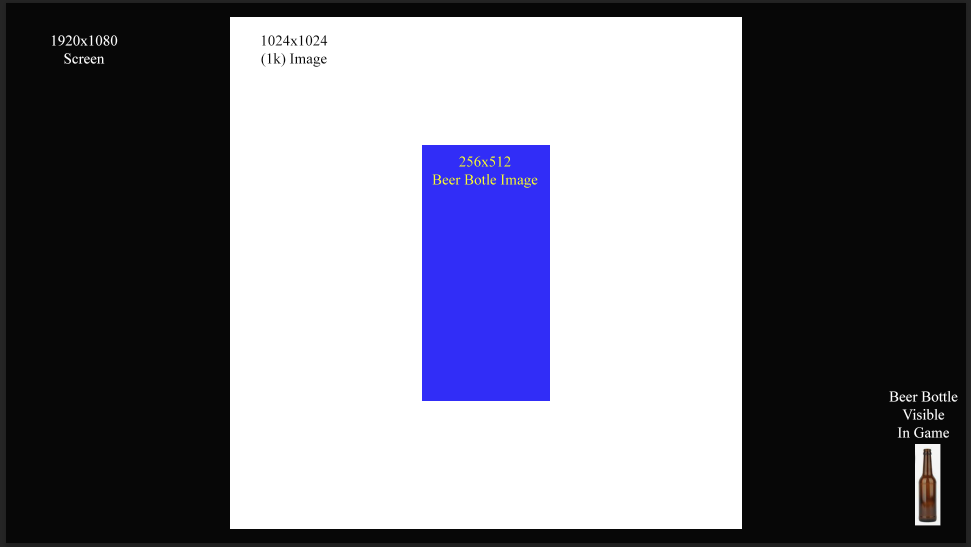 The HD texture pack adds 2k textures. Bethesda got some flack from that - some were not optimized and caused stuttering and crashes. Also things like the Rusty Face, caused by size mismatches in face textures. Not everything was upgraded to 2k. (I’ve seen complaints across the internet about the HD pack not looking that great. There was no real point to upping several items to 2k. I’m not certain if these people realized that.)

When playing on ultra settings, the screen size is 3840x2160 - that means that the 1k texture above will cover 1/8th of the screen and looks like this: At this point there is a case for using 2k textures.

To demonstrate how much of a texture is visible on screen, here is a 2k image with a 1920x1080 screen area superimposed upon it: 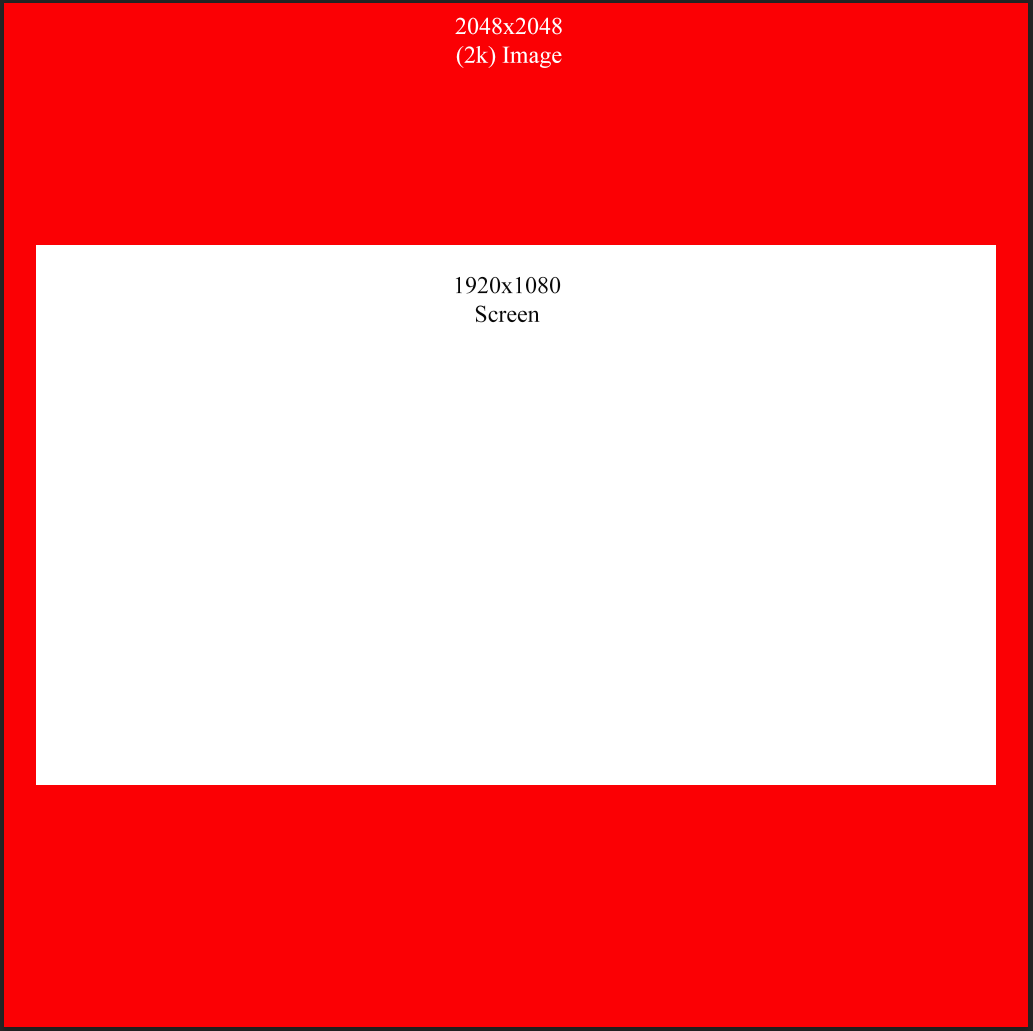 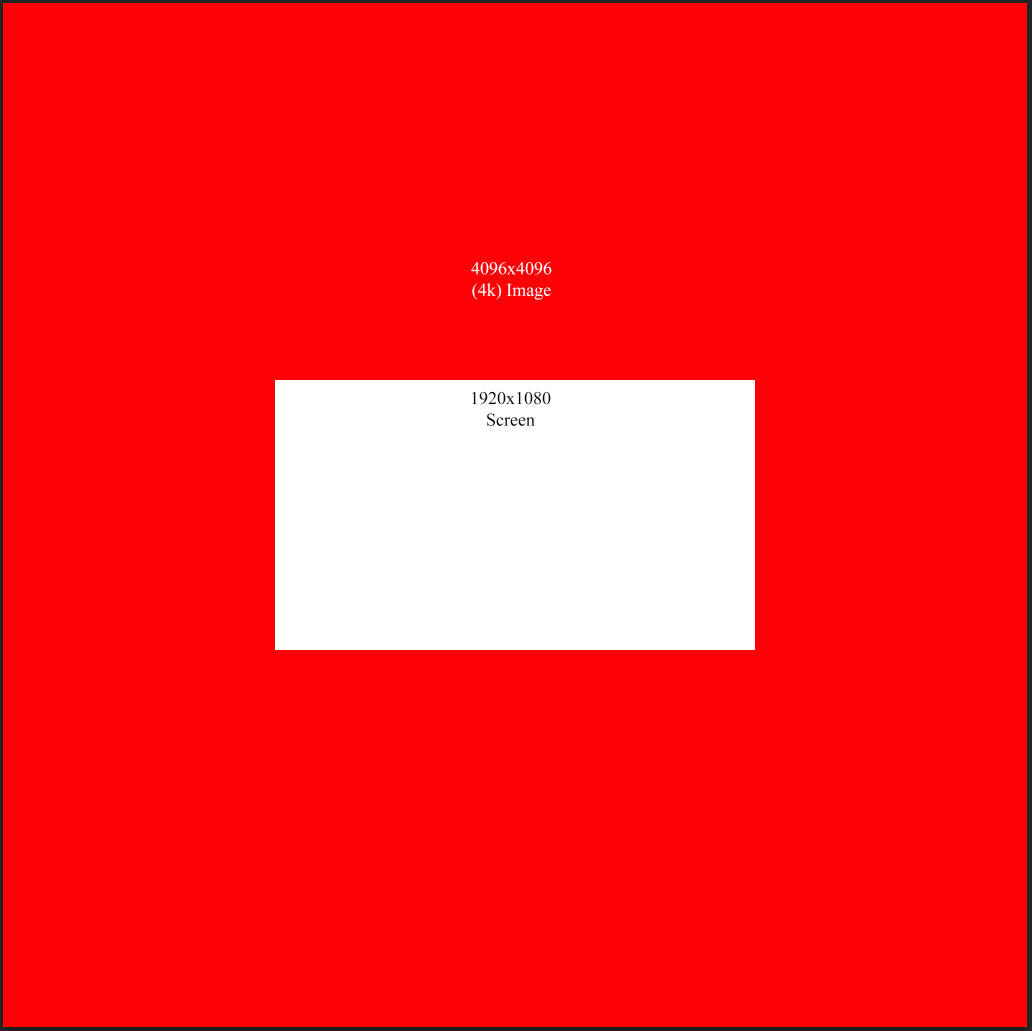 Admittedly, in some cases that 2k/4k image will be 'wrapped' in 3d, like around a bottle to provide texture on different sides. Think of a large label on a beer bottle, wrapping around.
Last edited: Sep 28, 2021

There are technically 3 files which make up a texture:

Remember that consoles have a total size 2 gigabyte limit for mods, and 1 gigabyte maximum per mod.. Your textures (all 3) are competing for this space. Even if you can compress down to half size, an 11mb 4k texture is a total of 90 files maximum.

Consoles are also about 85% of the gaming market. (Personal opinion: This will likely increase once the PS5 comes out.)

Small items of little importance, don’t use big textures. Having a 4k texture for a cigarette is a waste of system resources and makes the user’s computer/console struggle. It’s also not going to be seen - unless the user faceplants into the item on a regular basis.

Seeing a common wall on a regular basis - a decent HD/2k image can improve the user’s game. Ditto for trees, bushes, etc. As above, excess size on an XBox is hard on that system.

If it's like a core important piece of your mod: 2k will probably do well on all screen resolutions while 4k is overkill.

Remember: if it’s not being seen very often while close up, big textures are counterproductive.

A safe choice is likely to stick within the above guidelines for the HD pack. As an artist and modder you’re free to go all the way to the max. Remember though: you’re both restricting your mod’s audience and forcing the hardware (PC and XBox) to load more from disk.

Something like 85% of games are played on Console - that leaves 15% for the PC market. Consoles are extremely lucrative to game developers.

As a modder it is your choice whether to cater for console players. Some mods don't have a choice - anything that uses F4SE as an example. Other mods simply require CPU power that the consoles don't have.

Yet. It looks as though Unreal Engine 5 on PS5 will become the first exception:

For the moment though, there are limitations upon XBox:

XBox One X: 4k - all textures forcibly upscaled, at 30fps

You'll note that I do not include PS in this list. That's because at the moment the Playstation cannot have extra assets (meshes, scripts, textures) uploaded with mods. (Personal speculation) We will see what happens in the future - the demonstration of Unreal Engine 5 may place some serious pressure on the Playstation market.